Who's This? The Little Blue Cheese. 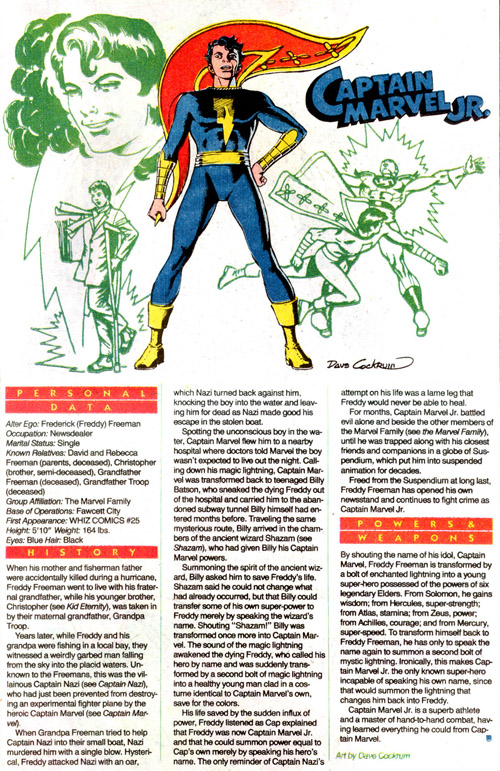 The facts: One might imagine that Captain Marvel Jr. took off after the popularity of Superboy given Cap's debatable origins as a Superman analog, but he has more in common with Robin and other teen sidekicks, having appeared almost three years before the Man of Steel's teenage alter ego. The odd twist is that Freddy Freeman may be a kid, but so is Billy Batson, but then Junior isn't a sidekick, he's a SPIN-OFF, introduced in Captain Marvel story (in Whiz Comics #25, December 1941) to immediately go off and head his own strip in Master Comics. Created by Ed Herron and Mac Raboy, Junior was "lent" power from Captain Marvel and so had to shout THAT name rather than "Shazam" to switch back and forth between identities, making him the hero who can't say his own name. He starred in Master from #23 to #133, and less than a year after his debut, also had his own dedicated title, which would last 119 issues. (He, Cap and Mary Marvel also starred in Marvel Family together for nearly 90 issues.) Like the rest of the Marvel Family, DC's lawsuits brought an end to his journey in 1953, and essentially tied him to Captain Marvel proper (for good or ill) from the 70s onward, though he never became a headliner again.
How you could have heard of him: Freddy appears in the Shazam! movie and as of the New52, Shazams into a silver-haired doof in the comics.
Example story: Master Comics #38 (May 1943) "Captain Marvel Jr. and the Secret Weapon" by Otto Binder and Mac Raboy 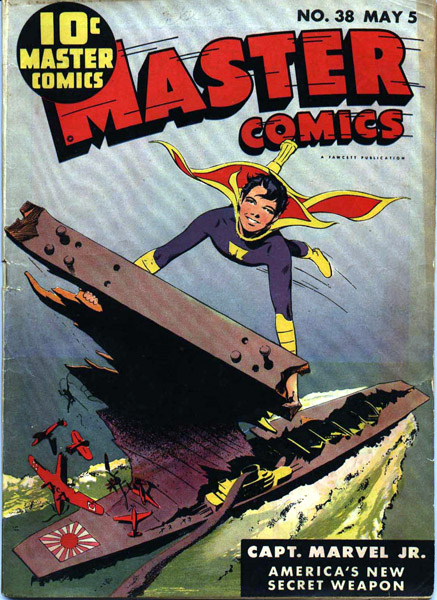 I really wanted to cover a story drawn by Raboy, whose doll-like figures keep the whimsy innate to the Marvel Family, but has a more realistic, illustrative, children's book sensibility than Captain Marvel's cartoony adventures. I also find the war-time stories interesting because while Cap is dealing with mad scientists, magical foes and weird creatures, Junior is, at least on the covers, actively involved in the war effort, happily destroying German and Japanese machines of war. Maybe it's because his first story involved Captain Nazi (coming soon to a Who's This near you), maybe just to make the stories different. In any case, while Japan is taking the hit on Master Comics #38's cover, the interior tale deals with an American secret weapon the Nazis want to get their hands on. The story opens on Germans with Colonel Klink accents plotting to steal it and its inventor, even if their arrogance makes them distrust its actual usefulness. Cue disabled newsboy Freddy Freeman over-hearing the German transmission at an American listening post with security problems. 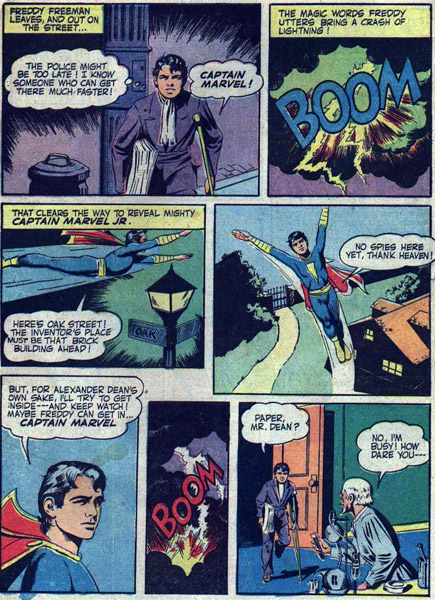 Freddy heads the spies off at the pass, but the crusty old inventor doesn't take to him and kicks the little snoop out. Well, I mean, he's working on top secret stuff for the war effort, after all. As he comes out of the house, the spies DO arrive and push him down, so it's time to call the lightning again. After a brief, but spirited fight: 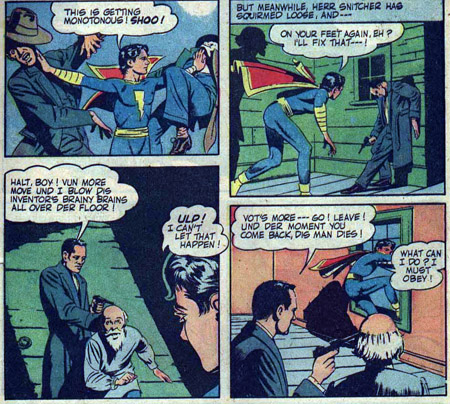 Junior prevails, but then the old codger is put under threat. He leaves, but heads to the back of the house to check out the secret weapon. It's a new kind of tank, but there's also an old tank there, which is when the Wisdom of Solomon strikes. 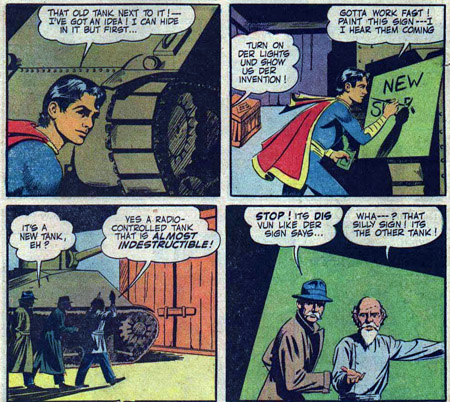 The inventor almost gives away the game, but you can't fool Nazi spies! A freshly painted sign HAS to be telling the truth. The old inventor argues with them - who's side is he ON?! - but they think he doth protest too much and put the old "rattletrap" in the back of their lorry. It's lighter than I would have expected... and it's about to get lighter still. When the old man is forced to use his remote control (for the other tank), Junior starts flying around with the tank around him. 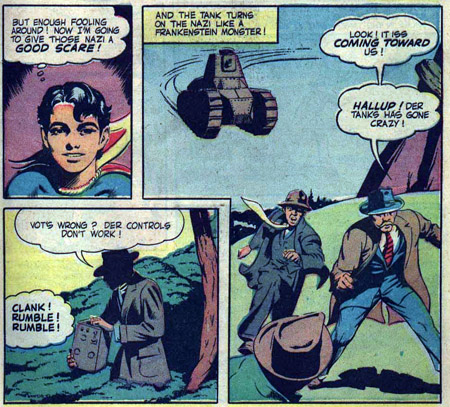 The Germans start firing a cannon at it, but the shells penetrate it harmlessly, cuz they can't hurt Junior. Flame-thrower? Nope, neither.

That... doesn't sound like a healthy breakfast, Freddy. Eventually, the tank does blow, but by then, Freddy is ready to capture the spies. 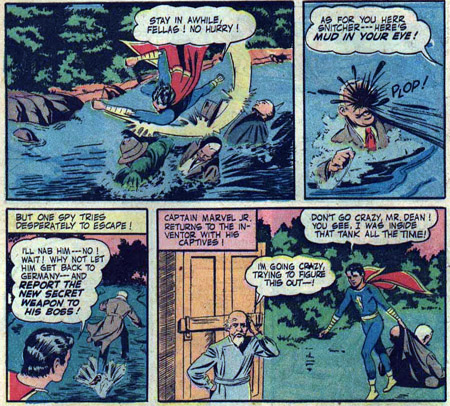 And so America's secrets are safe. The last panel shows a page from Freddy's diary, imagining Hitler biting his nails all the way through, worrying about what's coming.

So much more politically involved than the usual Marvel Family story, Junior as a patriotic hero, and that's probably what lent him sustainable success through the Golden Age.

Who's Next? The stinky fascist cheese.
Captain Marvel Comics Golden Age Who's This?