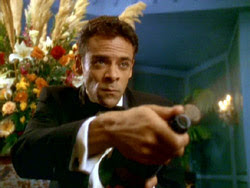 WHY WE DON'T: That old chestnut, a holodeck - sorry - holoSUITE malfunction episode.

REVIEW: On the surface, Our Man Bashir is just fluff, but pretty entertaining fluff using the (still preposterous) holodeck malfunction idea with an original twist that gives each actor the chance to have some fun in genre roles. Bashir's James Bond fantasy is so close to the fun of the original Connery movies as to be actionable, right down to double entendre names like Mona Lovsitt and Honey Bare. Despite the real danger to the characters, the episode doesn't take itself too seriously, taking pokes at both James Bond and itself ("what could possibly go wrong?").

Bashir is paired up with Garak, who's the perfect commentator since he's an actual spy. Obviously, the fantasy and reality don't match. The eventual confrontation between them is a good serious moment, but there's enough sassiness between them to keep it a light romp otherwise. There are fun scenes for everyone: Kira/Anastasia lying back to get a file, Worf/Duchamps's baccarat game, O'Brien as Falcon, Dax/Honey being seduced by Bashir... even the people topside (Odo, Eddington, Quark and Rom) get a few good lines and crisis-acting in. Sisko as Dr. Noah, however, takes the cake. Avery Brooks has already proven he can play fun lunatics, and Noah is definitely that (nice name too, at once evoking Dr. No and the guy with the flood). The point where he somehow didn't expect to win is great fun (and reminded me of certain role-playing sessions). Bashir's solution to his Kobayashi Maru scenario is certainly an inventive one.

But here's what a rewatcher should be on the look-out for, in my opinion. At what point does Bashir become a mutant? It's fuzzy, but I think Our Man Bashir is full of clues that say "as early as here". Garak makes a point of asking Bashir what his secrets are, and the program is meant to be revealing of his inner psyche. Beyond the idea that he might like spy games (as already evidenced by his attraction to Garak), you'll note that he doesn't play with anyone else, not even O'Brien, and that he has locked himself into the holosuites for days. What is he hiding? Well, look at what he's able to do in the game. While I can totally accept that a computer would allow you to aim unerringly and give you great strength or seductive charms, or whatever your character should be able to do, it can't possibly give you the geological knowledge Bashir exhibits here. Or how about spotting Falcon in the champagne bottle? Of course I can justify all of this with holodeck reasoning if I put my mind to it, but it's very likely that the program allowed Bashir to cut loose with his enhanced competence. Who's with me?

REWATCHABILITY - Medium-High: DS9's first holosuite story (oh Worf, see what you brought with you?), but it's more fun and inventive than most.
Star Trek

billjac said…
I've always considered the Bashir holospy episodes to be inspired more by the Our Man Flint series of James Bond spoofs than by the Bond series itself. The title seems to support the idea along with the similar styles of spoofery.

It was easy to miss the hints at Bashir's secrets here what with all the fun stuff going on, but I think you're right and they had decided that Bashir was a mutant by now. I'll have to go back and watch it again with that in mind.
December 11, 2007 at 1:06 PM

De said…
At one convention, script coordinator Lolita Fatjo made it seem like this episode would never be seen again after the Ian Fleming estate gave Paramount royal grief over what it had perceived as trademark infringement.

Dan said…
I was always a little bugged by Bashir's 007 fantasies- and even moreso by the Flash Gordonish "Captain Proton" nonsense on "Voyager." They seemed to reveal a lot more about the writers than the characters.

Why wouldn't Bashir's glamorous espionage fantasies revolve around 24th-century Starfleet Intelligence? Why not take the (in my opinion) much more creatively interesting route of doing a Holodeck/suite Malfunction episode that's something more like a 24th-century Bond movie rather than a fairly limp parody of a 20th-century one? Why would Tom Paris, who lives and works on a fricking warp-drive-capable starship on the far side of the galaxy and can presumably go to the phaser range if he wants the thrill of firing ray-guns, have a fantasy life based on chintzy 400-year-old movie serials that were considered trashy and laughable when they were new?

Maybe all the holo-programs feature 20th century (or earlier) settings/fictions because there's a 400-year standing copyright on everything later, OR posssibly, the copyright's not that long, but it's what hasn't been lost in WWIII. Or maybe the Trek universe just likes retro.

The Dixon Hill stuff never worked for me. It's just not Picard's style.

As for 00Bashir, this was a gift from his friend Felix (Leiter?), who also created Vic Fontaine. So this super-duper-holosuite programmer seems to have a particular obsession with posh 1960s settings. Bashir indulges him cuz he's brilliant, and interests often rub off on one's friends.

Anonymous said…
You know, even today, people love to play pretend around stuff that happened 400 years ago: renaissance fairs, playing D&D and other RPG's, fantasy conventions. You can buy a ton of medieval crap: armor, swords, etc. You can eat at medieval restaurants. What about those murder-mystery nights that people can play? Those are silly, but are hot sellers.

I guess in the Trek future, when you get some holodeck play time, you go for silly stuff, and get your minds off the daily routine.

They probably have a medieval holoprogram too. (Come to think of it, isn't there a Voyager episode on this?)
December 17, 2007 at 8:36 PM

Siskoid said…
You must mean the one where the Doctor plays in Beowulf.

LiamKav said…
I would also go along with the same argument that makes WWI and WWII flight-sims so much more fun than modern-day jet flight sims: technology can make things sterile. Presumably, a 20th century spy would be more "hands-on" than a 24th century spy.

Something came up during your review of "Past Tense" and I thought it would be good to ask here: In the US (and, er, Canada), how noticable is it that Bashir isn't white? It's something I never really noticed until his parents came on (and it was awesome that his dad was a cockney). Would you describe Bashir as mediterranean/olive-skinned (or whatever), or English first? I'm just wondering if there was any disconnect in seeing a non-caucuasian play the typically caucasian role of James Bond.
March 1, 2011 at 5:22 PM

Siskoid said…
Between the name and the look, Bashir seemed Asian to me (as the Brits would say), either of Pakistani or Indian descent. He would have grown up in the UK though, my only evidence being his singing Jerusalem with O'Brien, playing in the Battle of Britain, etc.
March 1, 2011 at 6:12 PM