Singing Songs of Donna (Among Other Things) 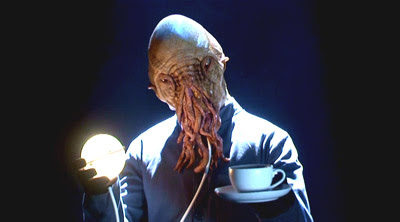 There's a line in Journey's End about "there are people living in the light, singing songs of Donna Noble, a thousand million light-years away... they will never forget her. While she can never remember." Invariably, this makes me think of the Planet of the Ood. For Donna's sacrifice to have meaning (or dramatic irony) she has to be remembered by everyone but herself. I find it odd (not ood) that that line resonated so much since it only really refers to this episode, and yet you get the feeling that there are a lot more places who have been affected by Donna - and with all the spin-off fiction, it may just be! So a strong image. And Donna IS quite effective here, even more than she was in Pompeii. Catherine Tate hits the right level of both comedy (in the recurring "we're not married" gag, for example) and drama (as when the Ood song makes her cry). A more low-key moment is when Donna comforts the dying Ood at the start of the episode, revealing untold levels of empathy and acceptance of the "other". If the three first episodes of any Doctor Who series are a showcase for the new character (usually with present-past-future), then Donna may just have gotten the best showcase sequence. 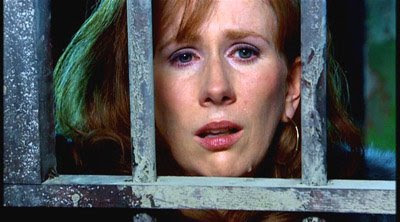 After their sort of comedy-horror role in The Impossible Planet, I wasn't really expecting another Ood story. Silly of me, since the make-up was so well-done, but you know, a background extra here and there in future episodes, not The Ood Story with capital letters. We discover why their are inately subservient, and what their true culture might be like. They even manage to use the red-eye effect without satanic influence. It's not the best episode by any means - there's way too much shooting, shouting and rushing about - but the Ood are surprisingly well used and the industrial locations have impressive scope.

Things to watch out for
Donna's Destiny: It may seem like the usual alien misunderstanding of names, but the Ood coin the phrase "the Doctor-Donna" here, a combined entity that will only exist 10 episodes hence. They also make an eerie prophecy: "I think your song must end soon." When I saw The Stolen Earth's cliffhanger, I thought it was paying this line off, but there's entirely more chance that they mean Donna. After all, they've got Doctor and Donna tied together as a single concept, perhaps because they themselves have a group mind. Another line jumps out at me, as they discuss the Ood's lobotomies: "You wouldn't be Donna anymore..." Poor Donna's own "lobotomy" looms.

Are you my mummy?: The theme of sexless procreation is again used, this time with Halpen's strange transformation into an Ood. Be careful what kind of DNA you're drinking! Like Donna, we're unsure what is right and wrong anymore, but the Doctor sees this as good, as if Halpen has evolved rather than devolved (towards peaceful ways, certainly), while the mechanical transformation of the Ood into slaves is of course, something to be stopped. Likewise the red-eye shift from peaceful to aggressive. There's a more subtle metaphor for change in the episode however, and that's the "Circle". Throughout, the Ood's catchphrase is "the Circle must be broken", and they mean this: 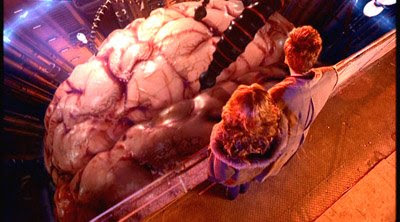 A forcefield inhibiting their group mind. But once they've succeeded, what do they do? 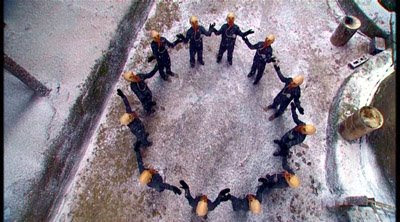 Another circle, the telepathic circle through which they communicate and sing their songs. The Circle isn't broken, it's evolved to a higher plane. Again, this theme culminates in Donna's ascension to Time Lord status.

The bees' knees: Donna mentions it again, this time in the same breath as global warming. Piques the Doctor's curiosity.

The reference section: The Doctor's excitement at seeing real snow refers to all those snowless Christmas specials that were filmed in the summer. Sorry to say, but this isn't real snow either! A much older reference is that the Ood Sphere is in the same system as the Sense Sphere, which the Doctor visited before. When? Back in the early 60s in The Sensorites. A gratuitous connection? You be the judge. The Sensorites do sort of look like the Ood. 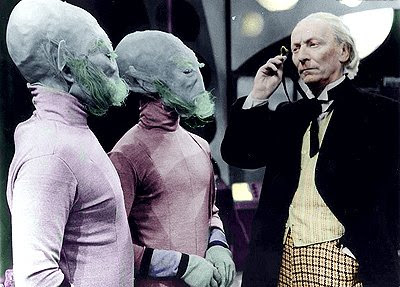 Not only that, but they too communicate through a telepathic field. Their culture is based on trust and they are essentially peaceful. The Doctor met them in the 28th century (or thereabouts), so who knows what human expansion has done to them by this time, the 42nd.

Next week: Sontar-a!
Doctor Who

snell said…
My big problem with this story is that the Doctor and Donna are completely superfluous to the outcome. If the TARDIS never shows up, events still unspool exactly the same: the scientist reduces the "circle" field, increasing the red-eye; the evil businessman drinks exactly the same amount of Ood-juice; and the Ood are free. Really, all the Doctor-Donna does is run around, get captured, and empathize. Not really much to justify "singing your names forever," eh?

It's a tribute to the energy of the directing/acting that you don't really notice this on the first viewing. But the fact that the Doctor and companion spend the whole story as merely passive observers makes this one of the weaker episodes of Series 4.
February 2, 2009 at 11:48 AM

Jeff R. said…
I could argue that without the Doctor-Donna, the end result is a galaxy-wide, violent and red-eyed Ood rebellion (which probably ends up with millions of humans and (after the counterstrikes) all of the Ood dying...

(It's a bit unfortunate that Turn Left couldn't have been structured to show that as well, although doing so would accentuate the 'Why isn't the Turn Left Universe part of the Empire of Pompeii?' question...)
February 2, 2009 at 3:14 PM

Sea-of-Green said…
I couldn't help thinking that the Ood would be a zombie's dream come true!

LiamKav said…
I wonder if it was known at the time that this would be Tennant's final proper season? That wouldn't explain the "Your song must end soon" line, although I also would lean towards it being typical RTD-style misdirection (One of the Doctor's companions is going to die. Honest.)
August 22, 2011 at 8:10 PM

Siskoid said…
I believe it was known (RTD was already shopping for a replacement producer). And I think the message was meant for both of them.
August 22, 2011 at 8:19 PM