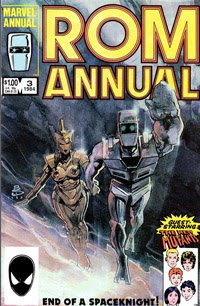 Rom Annual #3 is a benchmark issue of the series, and one of the only three issues I had to my name before embarking on this project and getting everything else from my local comic shop's long boxes (thanks Rémi!). Among the returns heralded in this post's title: A member of Rom's rogue's gallery, a member of his supporting cast (both of which I'll reveal in due course), and my favorite inking team of all time, Akin & Garvey. The day these two left Rom Spaceknight was a dreary one indeed. I'm glad for just one issue inked by the duo (over Wm. Johnson's pencils, this time). Oh and a Bill Sienkiewicz cover too!

But let's get right into it with a shot of juvenile Dire Wraith drilling a kindergarten teacher in front of her students. Starshine bursts in with the Light Eyes and everything, but only Rom realizes that she's just making the kids' therapy bills shoot up. 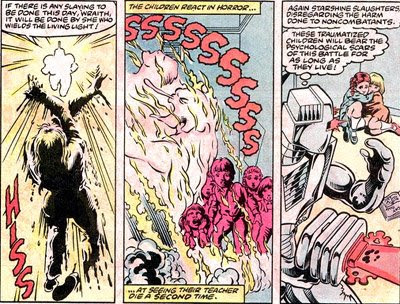 I mean, as if day care wasn't expensive enough! They take the fight outside to the river, and though Starshine is more than happy to boil the last Wraith to death, Rom, ever the reasonable one, banishes it to Limbo. But something escapes from Limbo! Something... scummy.

Ah man, I grew up in a paper mill town and there was stuff exactly like this in the river! I never suspected Wraith activity. Not in MY town. That's how they getcha. The pond scum finds "simple folk" down in Kentucky performing a baptism, and resolves itself into a humanish shape. 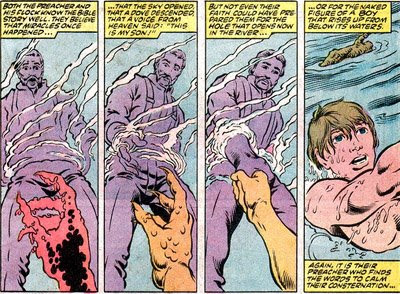 Who is this handsome young man who might or might not be played by Sam Neil with numbers shaved into his head? I'm not telling yet.

Kentucky is the home state of one Sam Guthrie AKA Cannonball of New Mutants fame (if the New Mutants can be said to hold any fame at all), and as it turns out, Professor X and his class are there for a visit. By coincidence, the young man who used to be river scum has been adopted by the Guthries' preacher, whose church is being menaced by a forest fire (not going well for Cumberland, KY). The New Mutants are on the case! 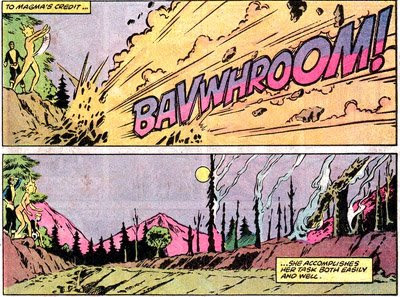 I especially love the locals' faces. If it were always that easy. 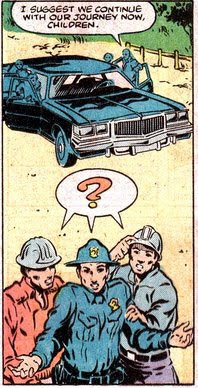 Rom and Starshine are also drawn to Kentucky by a SHIELD esper who apparently detects... Colonel Kurtz? 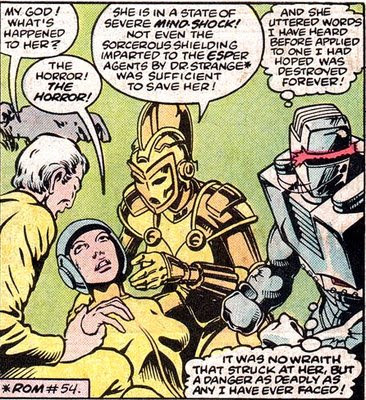 Nah, it's not. The evil son of a preacher man is none other than... HYBRID! 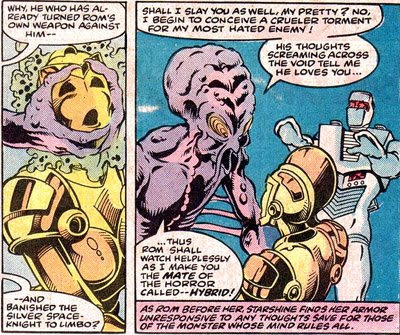 The icky super-powerful child of a Wraith and a human is back and he wants to make Brandy "Starshine" Clark his bride! To top it off, he banishes Rom to Limbo and forces him to watch as a phantom!

Step 1: Get Brandy out of the ghastly armor and into something even ghastlier. 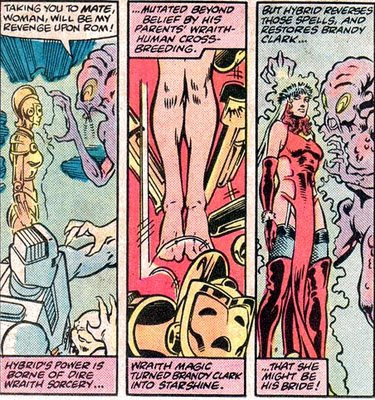 Step 2: Totally PWN the New Mutants, turn all the boys into best men and all the girls into MORE BRIDES. 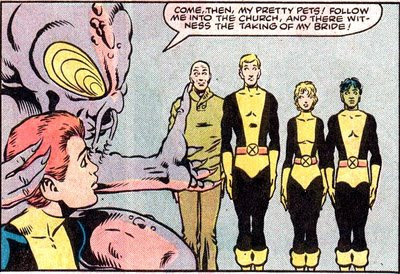 Step 3: Decorate the church... the Church of Rock! 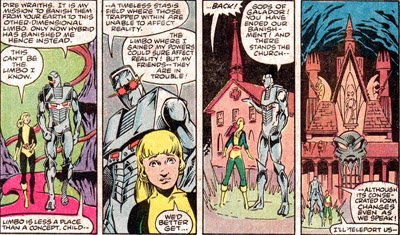 Oops, he sorta missed Magik there, and her ability to teleport to Limbo. That's how Rom gets out of his predicament and in a position to ONCE AGAIN CRASH BRANDY'S WEDDING! 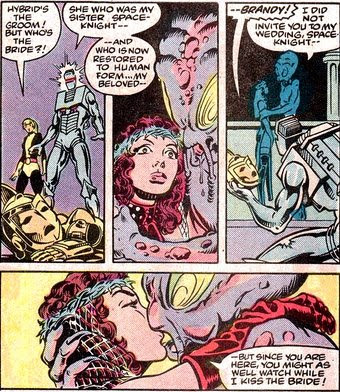 Thanks. That snaps Brandy out of it and seeing Rom's Neutralizer on the ground, she grabs it and tracks it on Hybrid. 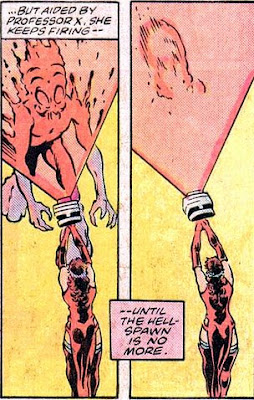 That's dangerous! Mjolnir-like, only Rom can hold the damn thing without psychic feedback frying his brain cells. But Professor X shields her from the worst of it. She barely makes it. 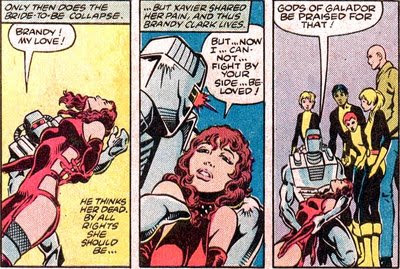 And that's how Rom finds his lady love again who, despite the leather togs here, has never looked more beautiful. Purged of the Starshine armor, she finds her heart. Awwww... And then falls into a coma for we don't know how long.

Next: "The beginning of the end of the world!" Promises.
Comics Rom X-Men

Prime Director said…
You're a savage for the Colonel Kurtz line. Nice.

Yeoman's work on this, maybe last great issue of Rom (annual #4 is good, but Ditko's art still stinks up the place.)

Mantlo created a classic villain in Hybrid. Rom always needed an assist from the X-folks to take down "The Horror." Even then, it was never easy. Notice how easily Hybrid took Professor X out of the picture?

It was always the girls that pwned Hybrid the would-be rapist in the end. First Sprite, then Rogue, then Ilyana and Brandy. At least, that's how things went when the writer knew how to handle the character. I don't know who the writer was for X-Man #31, but when he brought Hybrid back for a brief appearance, he totally failed to pick up on this.

Anonymous said…
Perhaps when Hybrid survives adolescene he could become a better villain. I mean, his damn libido leades his plots every time.
July 4, 2009 at 7:38 PM

rob! said…
Having the New Mutants cover corner symbol on the bottom right of this issue always makes me think I'm looking/holding the book upside down.
July 4, 2009 at 8:40 PM

Shlomo Ben Hungstien said…
i just found out thanks to ~P~ that Hybrid makes an appearnce (X-Men 31)in the Marvel Universe after ROM annual#3. that X-Men cover is part of my posting. did you know anything about this? i've always thought that ROM annual#3 was the last we saw of him. imagine my surprise!
September 30, 2010 at 3:04 AM

Siskoid said…
I was vaguely aware of this, but didn't see the issue. I covered every appearance by Rom, but not by the Dire Wraiths (and their offspring).

Shlomo Ben Hungstien said…
well at least now you know what the cover looks just in case you ever happen to see it you can pick it up and do one of your reviews. i'm sure there's some copies floating around out there in some $1 bins.
September 30, 2010 at 11:17 AM

Shlomo Ben Hungstien said…
Siskoid, ~P~ from Sanctum Sanctorum sent me an electronic version of of X-Man 31 which as you know is a post ROM Annual 3 appearnce of Hybrid. i just read the issue it's not bad they even mention ROM by name, go figure. let me know if your interested in it i think it would make a fine addition to your ROM related blog entries and i would enjoy reading your review of it. i hope you like my Marvel Fanfare issue with the ~P~ as Dr. Strange, ROM and Man-Thing cover. and thanks for your comment on the ROM 76 project. Rush did have a rather radical concept.
October 3, 2010 at 9:47 PM

Shlomo Ben Hungstien said…
it's worth mentioning that the issue opens up with a dedication to Sal Buscema & Bill Mantlo.
October 4, 2010 at 1:49 AM