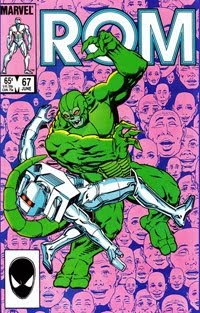 So no more Dire Wraiths, eh?

We'll see how it pans out, but the fear is that it will reduce Rom to an aimless Silver Surfer analogue, flying around space solliloquizing and feeling sorry for himself.

Not that the comparison didn't come up before.

The series hasn't quite forgotten Brandy yet, whose new, less frizzy haircut has only brought her more in line with other Marvel heroines like Jane Foster or Janet Van Dyne, which may be what's sparking Rick Jones' eros for this self-pitying, obsessed with Rom girl. I guess he's dying and is just trying to get a little something-something before he goes.

A return visit to the ruins of Clareton serves to cement the most dysfunctional family in Marveldom. 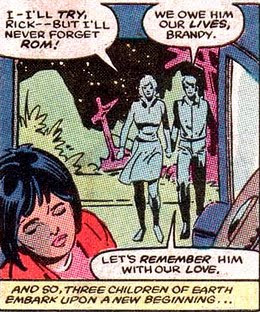 But geez guys, can't you spring for a hotel room. If not for you, at least for the little girl?

Meanwhile, Rom is 56 light-years away, acting like a friendly galaxy Spider-Man.

He too is feeling sorry for himself. Unsure what to do next, a poet in a soldier's body, and a soldier without a war to fight. Even if he could find the Galactus-tossed Galador, his humanity is no longer stored there, destroyed by ex-pal Terminator. So he's feeling a little suicidal (Rom only ever feels in extremes), when he comes across a desert planet on which he sees a flash of light. Investigating the barren wasteland, he follows the beacon to the Temple of Doom. 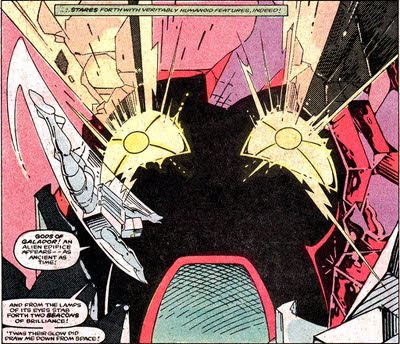 And is immediately beset by the brute on the cover (no that's not the Scorpion). They fight until Rom stops him with... a translation beam! 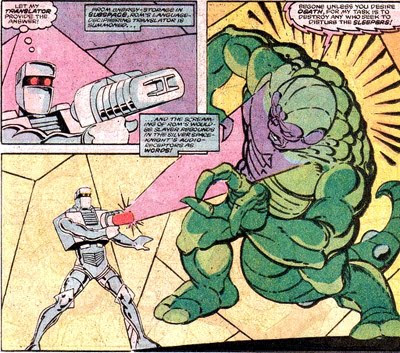 When Rom speaks to you in a language you can understand, you listen and you believe. They should put that in his role-playing game stats. The big green dude has a lot in common with Rom actually. He's obviously been transformed to act as the guardian of the planet's people who all sleep for 1000 years before waking up to the single hour each millennium when their planet is close enough to its sun and nature blooms. 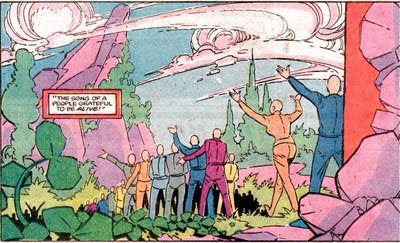 When the flowers wilt and the soil returns to the desert, they go back to sleep, their guardian standing watch. 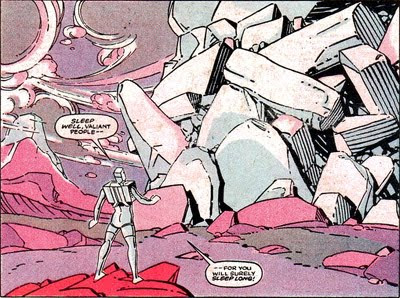 Rom learns a valuable lesson about how precious life is. Or as I would put it: "There are worse ways to live than as an immortal cyborg." In a 1000 years (974 actually), if I think of it, I should contact those bald guys and tell them they could all undergo the "Big Green Scorpion" treatment and rebuild their society. If I think of it.
Comics Rom