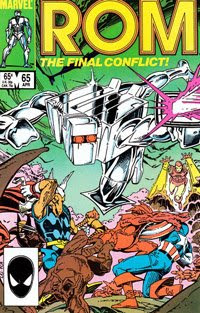 This is it! What you've been waiting for for some 68 Saturdays! The final battle between Rom and the forces of Earth, and those pesky Dire Wraith body snatchers. It's been a long war, and our favorite Spaceknight hasn't gotten a lot of help, all things considered. I mean, the X-Men here, Iron Fist there, maybe Reed Richards gives him some advice or something, but not a whole lot more.

Well, this time, Earth's non-toy-licensed superheroes might have to get there hands dirty. Wraithworld fast approaches like a giant curling stone sure to bump the Earth out of its proper place in the solar system, even as our sun is replaced with the Wraiths' black star. Gravitic forces have thrown the planet into upheaval, and did I mention? Rom has been hit by a Hold spell that prevents him from even pulling the trigger on his Neutralizer. 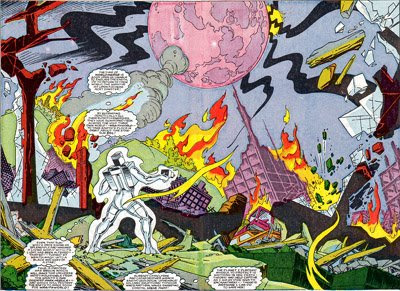 The Wraiths, always putting evil before business, think this is a great time to taunt him en masse. 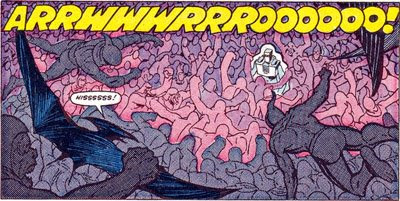 So where the heck are all the superheroes while this is going on? Haven't they noticed? Ah, there they are on page 11. 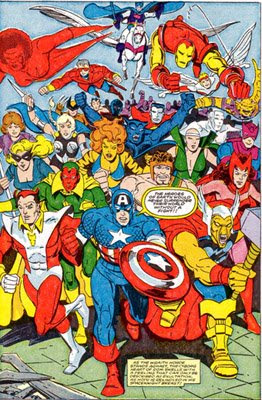 And according to the next piece of dialogue, they were sitting next to a ham radio when Rick Jones called to inform them of the situation, which is "every bit as grim as [he] described it". Look out a window once in a while, guys! Sheesh! So yes the Avengers (both coasts) are there, but also the X-Men: 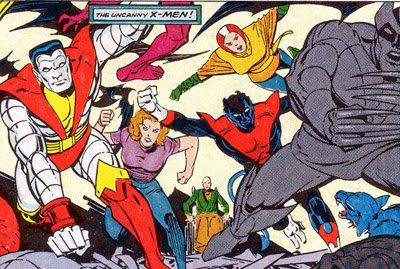 Rogue was apparently pulled from her WWI ace flying lessons... And then, there are the Defenders, the Soviet Super-Soldiers, and the Global Guardians. Or whatever it is Marvel calls its international stereotypes team.

Arabian Knight, Le Peregrine (hon-hon-hon), Shamrock, American Eagle, Blitzkrieg, a bunch of generic spandex-wearing guys in the back, and of course, Captain Britain, who wasn't yet getting the respect he deserves.

And let's not forget SHIELD's Wraith-Hunter Rangers, who think it best to stand behind a cancer patient, a little girl and a woman who just woke up from a coma. 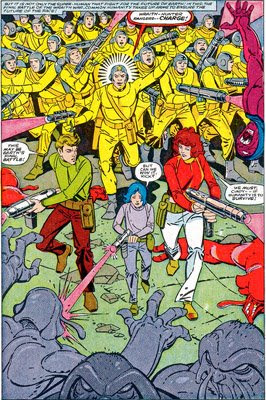 These last few find the frozen Rom, but Brandy Clark provides a plan to save him. Just as Rick Jones provides the angst. 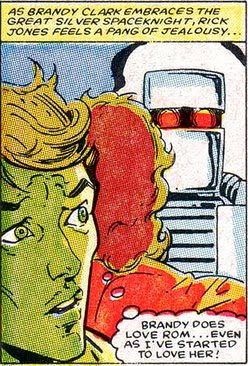 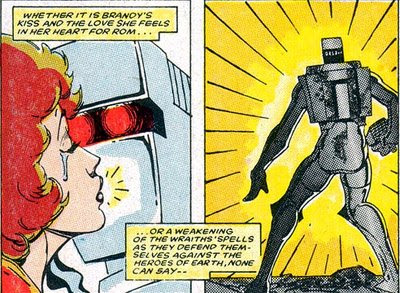 Just like Snow White after Prince Charming's kiss, Rom is energized and starts zapping Wraiths to Limbo by the dozens (that scene was cut from Snow White in the Disney version), until Cindy the Psychic realizes it's all a diversion. 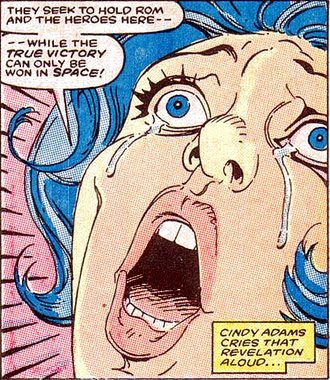 Rom heeds those words and flies into orbit where Gyrich has gone a little coo-coo for Cocopuffs, trying to force Forge to zap away the powers of every superhuman on Earth. Well, he's having none of that. 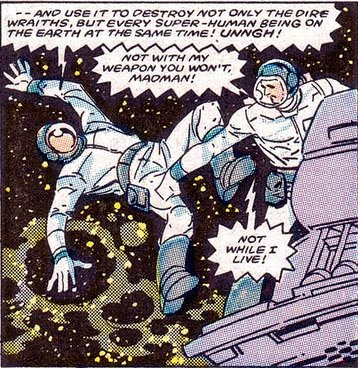 In any case, only Rom's Neutralizer can power the orbital cannon, and to Gyrich's dismay, Rom points it at Wraithworld itself! 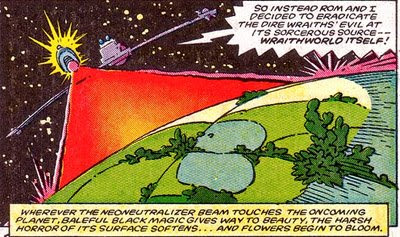 As the Neoneutralizer works its science against the Wraiths' magic, the planet becomes a verdant paradise and then, is banished forever. Without their world, the Wraiths are cut off from the source of their magic, and "has ceased to be a menace for all time!"

Next: What does Rom do now that he's gotten rid of his only enemies?
Comics Rom

Ditko's slat-dash art really makes this part of the series hard to for me to enjoy (his art reminds me of that episode of Futurama where Fry plays the holophonor.) Rogue's "helmet" is exhibit A. Wait until you see Brandy's "man hands" in issue #75.

BTW, did you notice that earlier in the series, the source of Wraith magic was said to be the eldritch rays of the Black Sun (remember the whole "cosmic alignment" story arc from issue #s 36-41?) But as of #65, somehow its Wraithworld. Oh, well.

I still miss looking forward to a new issue of Rom every month. Spaceknight Saturdays is the next best thing. This last year has been awesome, 'skoid.
August 8, 2009 at 12:34 PM

I mean, the cover depicts the greatest potential avengers line-up of all time, and they let it go to waste.
August 9, 2009 at 3:49 AM

Siskoid said…
PD: Obviously, you're able to read the original issues again, but since Rom can't for the moment be collected, I'm happy to bring his story to a wider public.

And I'm not a fan of Ditko's post-60s work either, though Spaceknight Saturdays adopts a certain enthusiastic style.

Servo said…
"And let's not forget SHIELD's Wraith-Hunter Rangers, who think it best to stand behind a cancer patient, a little girl and a woman who just woke up from a coma."

Nicholas Yankovec said…
IIRC this issue caused some confusion to readers of the Moore\Davis Captain Britain stories as he was shown in his very out of date costume. And I think this was because Marvel USA didn't have a clue about what was going on outside the US at the time.

It wasn't until Paul Neary, editor in the UK, went to the States to become a penciller on Captain America, that the revamped Captain Britain got his first US appearance.

I've often wondered if other countries had their own defining character stories that were overlooked. Maybe somewhere there's a brilliant Batroc story produced by Marvel France?
August 9, 2009 at 8:46 PM

Austin Gorton said…
I think this might be the very first issue of Rom I ever bought, mainly because I flipped through it and thought "wow, a huge fight with all the Marvel Universe? That's gotta be cool!"

Or whatever it is Marvel calls its international stereotypes team.

Ha! I think "The International Stereotypes" works as a fine team name.

I sure am glad Mockingbird is charging into battle. The Wraiths don't stand a chance now! ;)

Was Thor in this issue? I see Beta Ray Bill, but I can't recall if Thor made an appearance, nor what he was up to at this time that might preclude him helping out.

That definitely is some rough Ditko art. Who is the woman in street clothes, standing behind Colossus and next to the WWI Flying Ace, supposed to be? I know the X-Men pretty well, but I don't know her. Is it supposed to be Shadowcat, but not in her costume, for some reason?
August 10, 2009 at 2:17 PM

Siskoid said…
That is indeed Kitty Pryde, before she was known as Shadowcat or had a costume for more than an issue.

Thor didn't appear, which I think is why Bill does. Remmeber when continuity was this tight?

Austin Gorton said…
Remmeber when continuity was this tight?

I do, and it was awesome.

And yeesh, I know that era of X-Men pretty well, but you're right, I can't for the life of me recall what Kitty Pryde was doing, costume and codename-wise, right before she became "Shadowcat" once and for all.
August 10, 2009 at 3:48 PM

Siskoid said…
She was just calling herself Kitty Pryde, as evidenced by the Kitty Pryde and Wolverine mini-series.

Shlomo Ben Hungstien said…
I'm sorry I know Dikto was the shit back in the day but as a kid i hated it when he took over the series. in contemporary comic book art of the time his style was out dated and just looked all around goofy. a damn shame they used him in such epice issue. Imagine if this issue had been penciled by someone like Sal Buscema or Mike Golden.

Siskoid said…
I'll check it out.

Shlomo Ben Hungstien said…
just had a look at my blog today and i have to say Siskoid you are both generous with your blog info. and a veritable fountain of great ideas with your comments. and speaking of the whole ROM licensing issue your not gonna believe this. get a load of my commnents on the page of this Marvel of the 80s blog in regards to a Secret Wars II Omnibus when you have a free moment:
http://marvel1980s.blogspot.com/2009/05/secret-wars-ii-omnibus-details.html
September 20, 2010 at 2:12 PM