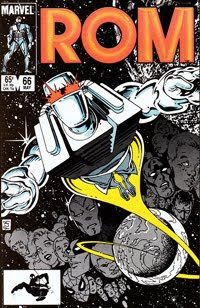 Every year or so, around the time a major storyline wraps up, there's an issue like #66 that serves as a recap of all that's gone before and a launching pad (mark those words) for all that is to come. In a time before trade paperbacks, before Wikipedia, before what we think of as civilization, that was how you let readers know what the heck was happening. So if you pick up an issue of a contemporary title and get confused, it's because they expect you to do your own research.

But simpler times, simpler tools. And it's not like nothing happens in #66. It's a change of status quo. The Dire Wraiths have been defeated on Earth (and largely elsewhere thanks to the loss of the source of their magic), and Earth's heroes have corralled the few remaining. They know their time is up. 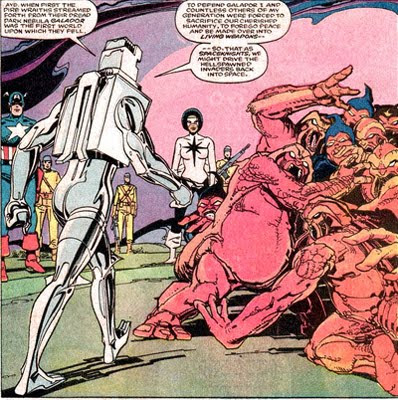 Captain America's a bit worried about the oncoming execution (Lefty!), but he shouldn't be. It's Limbo for them. 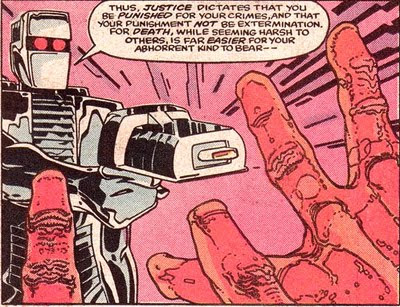 The Neutralizer set on wide dispersal, Rom makes quick work of these uglies. I think I'm gonna miss them. I mean, who ELSE is he gonna fight? New-villain-that-won't-catch-on of the Week? Probably. All the heroes that HAVE a proper rogue's gallery take off and leave him with his supporting cast. 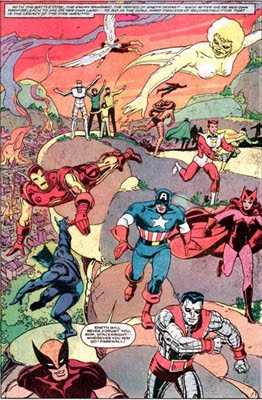 Hm, I didn't figure Starfox for a runner. Rick, dude, have a sense of occasion. This is no time to smile no matter what you're thinking of doing with your new wife. (Is Rom licensed to marry people? We're certainly far from the days of his bursting into churches to stop weddings. Specifically Brandy's weddings.) Before he goes, he takes in the sights, recording things for his personal collection. After all, he needs some angst fuel for the trip. 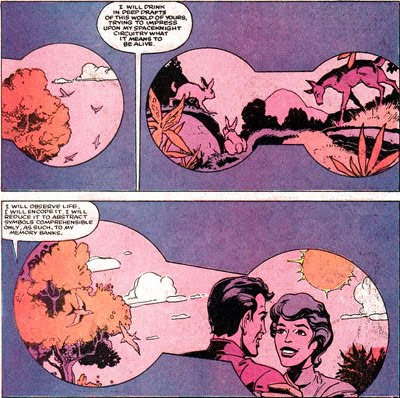 Don't worry, Rick gets some angst fuel on the very next page too. And the reader gets a bit of nightmare fuel in the process. 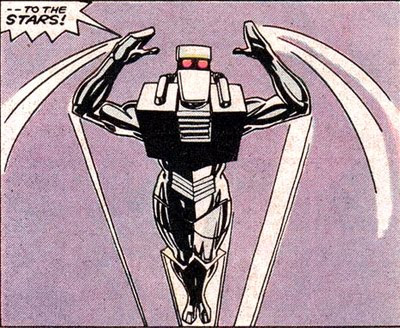 Like I said: Launching pad. It's a big, cluttered universe out there! Rom could wind up anywhere! 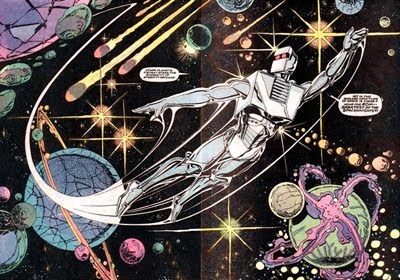 Really cluttered. Man, some cosmic entity really should tidy it up.
Comics Rom

Prime Director said…
You know, I remember Cap decapitating Baron Blood with the edge of his shield in one issue. So its ok to kill undead bloodsuckers but not extra-terrestial brain eaters? What do you suggest we do with 'em, oh Sentinel of Liberty? Give 'em lawyers and put 'em on trial?

Siskoid said…
It was war.

Rom often said that to the Wraiths, death was preferable to banishment. On occasion, Wraiths have actually begged for death. Is Limbo really worse than death? There is an in-continuity explanation.

Death may not be permanent to the Wraiths. Remember issue #38, where the Wraith warlocks used their sorcery to raise that girl from the dead? Its not inconceivable they could do the same thing for their dead brethren. So maybe the Marvel Universe hasn't seen the last of Doctor Dredd, or Volx.

Speaking of Volx, any post-Spaceknight Saturdays plans to feature the Wraith appearances in The New Warriors series?
August 17, 2009 at 8:11 PM

Siskoid said…
I currently have no plans to continue Spaceknight Saturdays after Rom wraps up, since the main reason behind the feature was to showcase unreprintable material.
August 17, 2009 at 8:57 PM

Anonymous said…
WHAT? No more Spaceknight Saturdays! But the series not even ended there! You can't do that Siskoid. Pleeeaseee....

OK, let's negotiate. What do you want? Comics? Harems of tamaranians girls? Empires of gold and coconuts? Just ask!

----
Talking about Prime Director's point, it could be said Baron Blood was a vampire, not a living being (un-dead, get it?=. So you can't kill someone who is already dead.

Anyway, Cap is truly Lawful good, so he had a bad moment doing it.

There is an idea for future posts, Siskoid. How about talking about superheroes' alignment? Is Wolverine Chaotic Neutral?

Siskoid said…
I can't ever look at superheroes and think of them in terms other than the DCHeroes RPG Motivations. Cap is Upholding the Good, Rom is Unwanted Power, Wolverine is Batshit Crazy.

As for continuing Spaceknight Saturdays, I don't have any issues of the apparently terrible Spaceknighs mini-series. You'll notice that Rom and Dire Wraith appearances in places OTHER than Rom weren't featured on Saturdays, but rather in extras elsewhere in the week. That will most probably happen with extra material I come across.