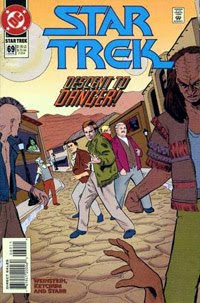 PLOT: Kirk and Scotty are joined by Sulu and Lukas on an intelligence gathering mission in a sector where the Federation and Klingons are competing for colony space. Disguised as Nilarans, they learn from the local fool called Lanamish that a Klingon colony has recently been recalled, but the colonists are planning on rebelling. This is confirmed by Klingons Sulu has promised to help find supplies for (they've been cut off). Scotty finds a weapons cache. Meanwhile, the Klingon Empire plans a retalliation against its colonists and Spock is ordered to stay away lest the Federation be involved...

PANEL OF THE DAY - Cartwright knows how to use his viewscreen... FOR DRAMA! 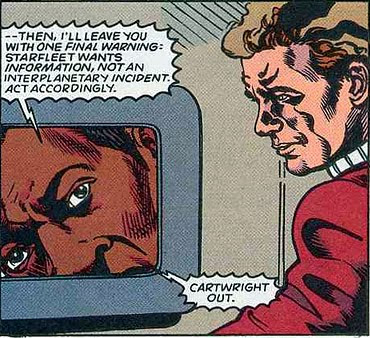 REVIEW: You know, I love Sulu, and he comes off here as a more level-headed captain than Kirk does, but the justification for sending two captains on a reconnaissance mission is pretty flimsy. If Sulu and Lukas have experience with the sector, why involve the Enterprise rather than the Excelsior? Aside from that, this arc is off to a good start. Weinstein imbues the guest characters with their own personalities and introduces some that are both entertaining and mysterious. Though Rachel Ketchum's figure work is about as weak as Derenick's, her likenesses are better and her style more expressive, so it's easy to forgive its weaknesses. Plus, she always fills the background with activity, making the featured planet come alive. So while rough in spots, she generally elevates Weinstein's script.
Comics Star Trek Star Trek Comics