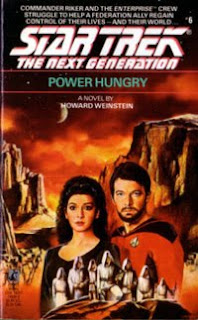 PUBLICATION: Star Trek: The Next Generation #6, Pocket Books, May 1989

STARDATE: 42422.5 (between The Outrageous Okona and Loud as a Whisper)

PLOT: The Enterprise brings supplies to the polluted and famine-stricken world of Thiopa, but find that the despotic government might be just as much at fault as the pollution left by a Nuaran Imperium occupation. The dwarven Ambassador Undrun creates more problems because of his arrogant attitude, and dissenters called the Sojourners are dedicated to convincing the Enterprise of their cause. Their big ploy is to kidnap Riker to show him how bad things are, and perhaps to ask Picard for weapons, the same thing the government is requesting. Fealing a measure of responsibility for Riker's capture, Undrun beams to the Sojourners' stronghold to negotiate his release, but he's been taken by a more radical element hoping to trade him to the government for concessions. Undrun briefly becomes a new hostage, but Picard makes a show of good faith and in return gets Undrun and Riker back, the latter beamed away from a government ambush. Picard gives both sides' leaders the information on how desperate their ecological situation is, but they still refuse to cooperate with one another. He splits the relief supplies in two and goes on his merry way.

CONTINUITY: The Ferengi are often mentioned as the "big bad", which TNG was pushing in the first couple seasons.

DIVERGENCES: La Forge and Worf's musical abilities are never referred to again. Pulaski uses the transporter twice without voicing her anxiety, once gratuitously. 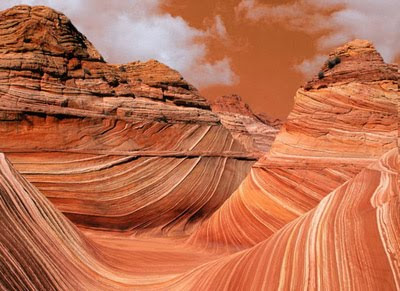 REVIEW: If I'm always complaining about Weinstein's overuse of "factions fighting on planets we've never heard of" in his comics, it's because I was already familiar with his novels which did the same. Power Hungry (and later, Exiles) does just that. It's Dune Lite, an ecological fable set in a Middle Eastern-ish culture, Fremen and all, and I don't dispute that he presents an intriguing culture. The dialogue is good, the characters well drawn, and I appreciate such things as Wesley getting a call from his mom and the basically atheistic TNG crew manifesting some spirituality. However, there's entirely too much exposition, sometimes because the novel cut away from action it might have described directly, and too great a focus on one-off characters, with whole chapters going by without a TNG appearance. It's a failed mission, which is unusual and realistic, but also leaves you feeling like you just read 273 pages of environmental polemic without a satisfying resolution. Frid Undrun remains the only memorable thing about the book, and he's so atypically built, he's hard to cast in your head, so ultimately a distracting element.

ShadowWing Tronix said…
Did Weinstein do anything other than Star Trek? Was this what he was famous for everywhere (like Tom Clancy/political and military stories, Michael Chriton/science or Steven King/horror)?
August 16, 2009 at 12:49 PM

Siskoid said…
Though he later wrote novels for V as well as original stuff, he got the Star Trek gigs because he'd written one of the Animated episodes (The Pirates of Orion).
August 16, 2009 at 12:53 PM

Alden said…
This is a little off topic, but I have a question that I have been pondering and thought it would be best to hand it off to a more knowledgable fan: Which Enterprise was the least remarkable when looking at both a contribution to the Federation and the Franchise?

My feeling is that the A is the least remarkable as it had the pretty good Undiscovered Country and the extremely bad Final Frontier that makes it have less a contribution than the B which was in another pretty good movie and also had an opportunity to be continued in storytelling while the A's stories have to be shoved in between three films that almost seemed to run concurrently.

Siskoid said…
The NX helped found the Federation and saved Earth from the Xindi, so mucho impact. For the franchise, we're talking 4 years, some of it better than you remember.

1701 (and we're always talking pre-ST movie here) also saved Earth (TMP), and was also involved in the Organian Treaty (for example). For the franchise it is the most important.

A had 2 movies (despite this being a post about a book, I'm guessing you mean "canon" only), one which had an important role to play in making peace with the Klingons. For the franchise, you could never notice the A and not know the difference.

B had a very poor outing in Generations. Laughing stock really. From what we know, I'd say this had the least impact both on the world and the franchise. Kirk dying there should be taken as a minus.

C was only seen in Yesterday's Enterprise, one of the best remembered TNG episodes (franchise), destroyed in a battle than cemented the Fed-Klingon alliance AND ultimately gave birth to Sela.

D, with 7 years and responsible for the resurgence of Trek in the 80s and 90s in second on the franchise scale. It did plenty for the world as well, saving Earth from the Borg, lots of diplomatic missions and representing us before the Q.

E played an important part against the Borg and Romulans, securing its place in the Trek universe, and for the franchise, helped TNG grow to movie status (the D is so TV, it didn't work very well in a movie). The coolness/refreshing factor makes it superior to the A.
August 16, 2009 at 6:06 PM

Alden said…
I was considering the "fuzzy canon" of comic books and novels, as I figured plenty of Trek authors and artists would rather take the relatively undeveloped B into new places instead of further shoving stories onto the A. If I wrote novels or comic books, I think I would rather tell stories about the B and try to make it interesting than do the Kirk and crew stories to death.

Siskoid said…
Writers of licensed fiction work on what they're told to work on, and the A (or late movie era) is a much better seller than the B.

In fact, as far as^spin-off fiction goes, Riker's Titan and made-up ships like the Excalibur and the Da Vinci all get more play than the B and the C.
August 17, 2009 at 9:05 AM

ShadowWing Tronix said…
Back to Weinstein for a moment: did his non-Star Trek stuff also feature the two factions with a third party in the middle? That's pretty much what I meant with the Clancy and Chrition comparisons.
August 17, 2009 at 10:14 PM