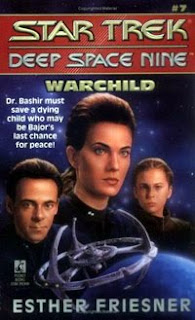 STARDATE: Unknown (between Seasons 1 and 2)

PLOT: Two Bajoran clergymen come to Sisko for help, one for medical relief from an epidemic ravaging refugee camps in areas devastated by the Cardassians and where children must toil in the fields or starve, the other looking for a child of that area who, according to Kai Opaka's prophecy, will become a great healer who will bring the warring factions of Bajor together in peace, unless a political faction uses her for war instead. Sisko sends Bashir and Dax to Bajor to accomplish both objectives. Bashir cures the illness and Dax thinks the sister of his assistant Cedra might be the child they're looking for. Kira is sent to take the child, Dejana, to the Temple, but she's been taken by a government agent. Her brother rescues her and Kira takes the siblings to DS9 for safekeeping. Meanwhile, Bashir has gone off the grid to help other refugees in the area and gets kidnapped by hill fighters in the process. Dejana is dying from a more virulent strain of the disease, so finding Bashir becomes a priority. Cedra comes up with a rescue plan that succeeds. As Bashir works to cure her, the government agent hopes Dejana will die and the Federation will lose face, as he is a member of the Circle. But Dejana is not the child they were looking for. Cedra reveals himself to be a girl (Cedara), and the "Nekor", threatening to spark a civil war if her sister dies. She doesn't, and she stabilizes the political parties before entering the Temple to become a healer, even though the prophecy's hidden text reveals the time has not yet come for peace and that she is not the true Nekor.

CONTINUITY: Opaka still has followers even though she is lost in the Gamma Quadrant (Battle Lines). Mullibok (Progress) now farms at the barren refugee camp and is quite content there. This mention of the Circle sets up the first three episodes of Season 2.

DIVERGENCES: The Vedek Assembly is called the Temple Council.

SCREENSHOT OF THE WEEK 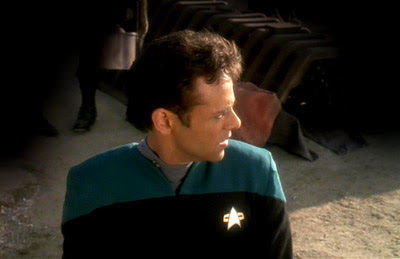 REVIEW: When Deep Space Nine got under way, I vaguely remember resenting the "Bajoran" episodes because they were atypical of Star Trek. But as I really got into the series, they became my favorite episodes of the pre-Dominion seasons. Warchild is definitely in that vein, with a nice wink at the Circle arc and throwing even more complications in the political and religious structure of Bajor. Friesner drives most scenes using dialogue, which makes it more of a piece with the television show, though interior monologues are also used to good effect. This is a rare instance where I am totally convinced Bashir is a mutant, confident beyond measure and uncannily able to partition different sides of his mind. Certainly a strong story for his character - in which he even gets a brief romance - and the guest characters are well drawn too, especially the sibling Nekors.