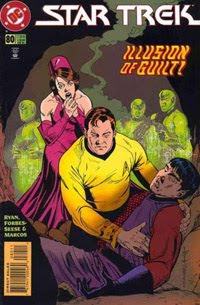 PLOT: Kirk and the Romulans search the Neutral Zone to find who attacked their facilities and ships and the Romulans discover a transmission from the Enterprise to an unknown ship about to attack more Romulan holdings. The sender is revealed to be ambassador Julia Bertrand, a Metan who like her people, was shocked to discover there was sentient life other than their own and so want to destroy all other life to prove it doesn't really exist. They're the ones trying to start a war between the three major powers in the quadrant. The two ships try to head the Metans off at the pass and are joined by Kang, also on the warpath. Together, they stop the Metans and the two Imperial warships blow them out of the sky.

PANEL OF THE DAY - This is the end, so why not? 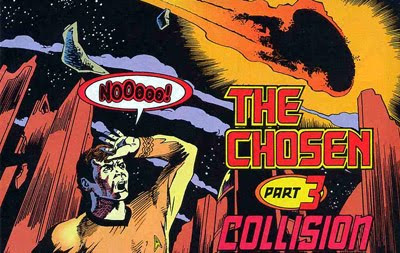 REVIEW: The big reveal is at once expected (introduce a guest character and they're highly likely to be a mole) and a complete howler. Man, this story doesn't make any sense! There's no real reasons for the Metans to put an agent on the Enterprise since it risks their discovery. Why does the Federation employ a Metan ambassador if the planet is so xenophobic? Did she enroll in the diplomatic corps and rise through its ranks until this plan was ready? Why does she have an Earth name? How did the Metan ship give the Enterprise such a hard time 4 issues ago, but is a relative pushover here? Most importantly: Who cares? There was promise in a Starfleet/Romulan collaboration, but it seems like all the elements have been wasted on an illogical premise. A terrible way to end the series. Seems like they could have locked up the movie era with a late story leading into ST VI instead...
Comics Star Trek Star Trek Comics