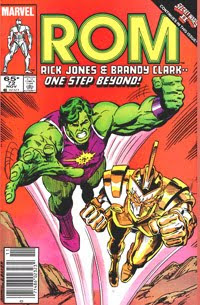 Secret Wars II... The ill-advised, badly-named, often ridiculous (Spider-Man potty trains the Beyonder?) sequel to one of the coolest crossover stories of all time. Remember that? I wish I'd FORGOTTEN it. Basically, the Beyonder comes to Earth to get more info on this "desire" thing we have - consistently missing the point that, hey, he DESIRES to know what desire is - and provides writers across the Marvel Universe with a deus ex machina machine (um... that's a little bit redudant, but you get my point).

Hey, if he has this crackling energy form, we don't need to see his jheri curl, right? He's on Earth, so no helping Deep Space Rom. However, we did leave a supporting cast in pretty dire circumstances. Rick Jones (cancer patient), Brandy Clark (broken heart) and little Cindy Adams (Dire Wraiths in her head) have decided to "become a family" and live in what appears to be the blandest cabin in the woods ever.

The Beyonder sees how unfulfilled they are and decides to appear to them as a handsome blond man knocked out by a fallen tree branch in the storm. 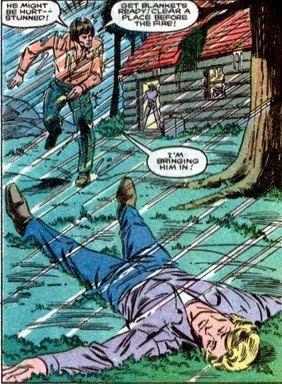 So we don't need to see the jheri curl, am I correct? Soon, Cindy and her "voices" detect he's not what he says he is and he reveals himself in his full glory. 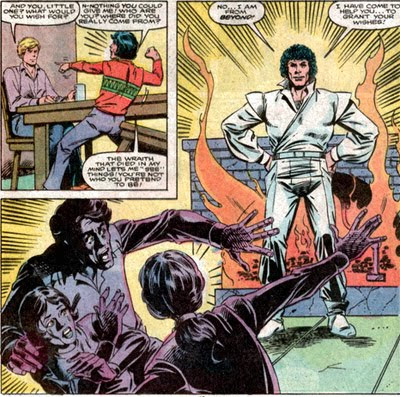 Which I guess includes the jheri curl and disco outfit. Aw man. In short order, he cures Rick's cancer, turns Brandy back into Starshine and takes Cindy's Wraith pains away. They then realize they should have used their magic wishes more wisely. Rick should have asked for super-powers, Brandy to turn Rom back into a human, and Cindy for her parents back. But it's not too late! The Beyonder's no three-wish genie! 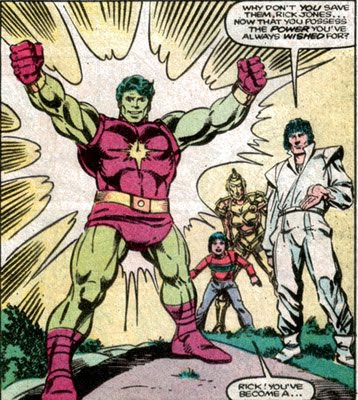 Gamma Rick's first task is to save some bunny rabbits from falling off a mountain the Beyonder levitated as a further test of his wish-granting ability, and it soon becomes clear that every wish has an unforeseen consequence. Gloomy Starshine in fact proposes a scenario in which everyone is saved only to destroy the world.

She should write for What If? She's got a knack. The only one who sees no harm in asking for more is little Cindy. She wants her parents back, and the Beyonder reveals they're not yet dead-dead. Their souls are inside the Dire Wraith that took their identities, and they're in Limbo. A second later, Gamma Rick and Starshine are there too. 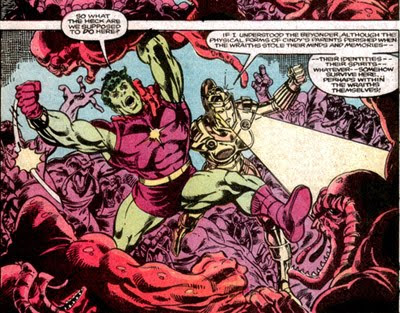 And every Wraith has captured souls in it.

That's pretty distressing to people who've had loved ones taken away by the Wraiths, especially Brandy whose parents and fiancé are in there somewhere. But with all the anxiety regarding "consequences", they decide not to bring back every single soul and only concentrate on Cindy's parents. Sorry Tornado.

So they bring back the offending Wraith and the Beyonder pulls the two souls right out of it before sending it back to Limbo. 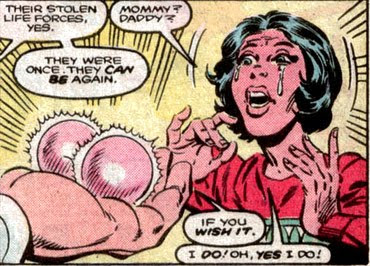 The balls turn into Cindy's loving parents and she's happy in a way adults can never really be. To prove that point, Rick wishes to be put back the way he was (minus the cancer, the selfish bastard), and Brandy asks not to be Starshine anymore and just be sent to Rom's side. ALAKAZIM! 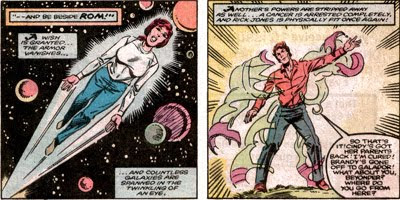 So that's it for that makeshift family. Did they ever really care about each other?

Next: Brandy gets there!
Comics Rom Secret Wars

I'm still annoyed by the revamp of him when it turns out he's just a cosmic cube all grown up and all the cosmic beings pretended to be weak to help his self-esteem.

Anonymous said…
Even more ridiculous was Bendis' turning him into an Inhuman afected by the Terrigen mist.

Austin Gorton said…
I don't know how much of that "Beyonder was a mutant Inhuman" stuff is considered canon. Bendis introduced it, but I seem to recall the story itself suggested that perhaps it wasn't entirely accurate.

Or maybe that's just wishful thinking on my part, or it's one of those situations where a writer retcons something and before the ink is even dry, fandom as a whole rejects it and just glosses over it.
October 5, 2009 at 12:24 PM