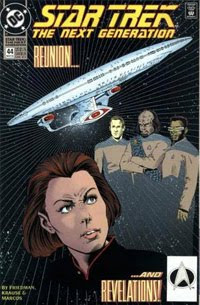 STARDATE: 46301.8 (between A Fistful of Datas and The Quality of Life)

PLOT: After the saucer section and battle bridge are reunited, people get back to their lives. Troi wins the pool tournament for O'Brien (she's quite the hustler). Mot tells Worf Alexander need not apologize for his earlier comments about his being a bad strategist, not after he relayed his strategy to Riker and saved the saucer. Terry Oliver tries to face her feelings about the Sztazzan with Crusher's help. And the crew celebrates Ro's holiday after doing a little research.

DIVERGENCES: Though Ro's Bajoran holiday seems properly Jewish (as per the Bajoran-Jewish allegory set up from their very first appearance), there's still no mention of Prophets, which is odd in retrospect.

PANEL OF THE DAY - Sometimes, I don't understand what they're complaining about. 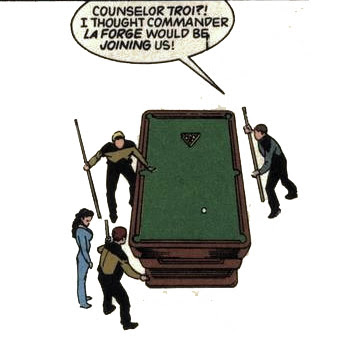 REVIEW: Restoration works well as a final bookend to the latest arc, picking up the character moments where from Bridges (issue #39). There are no big reveals here despite what the cover would have you think, and really no surprises, but it's a pleasant enough epilogue.
Comics Star Trek Star Trek Comics