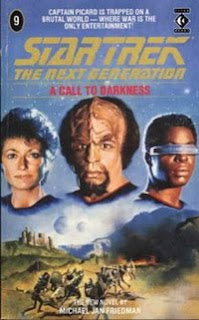 STARDATE: 42908.6 (between The Emissary and Peak Performance)

PLOT: The Enterprise detects the presence of a lost Federation ship on an alien planet and Picard, Worf, Pulaski and Geordi beam down. Unfortunately, and just like the crew of that ship, they are immediately transported away to "Conflict Zones", given amnesia, and put to service in massive reality tv programming by the natives. Riker tries desperately to get them back, but is also forced to deal with an outbreak of plague that only Pulaski has the solution to. On the planet, the away team members find themselves separated from each other, working with a variety of amnesiac species (collectively known as "Conscripts"). Eventually, circumstances conspire to bring them together, and with the help of Data posing as an alien of the ruling caste and a group of native dissidents, they manage to escape the "Conflicts". Pulaski has accidentally removed the mind blocks thanks to a blinding flash of light and she uses that knowledge to cure the away team, and then the rest of the Conscripts on the planet by creating a meteor shower. The aliens give up on their games, and the Enterprise heads for a starbase with 18,000 refugees aboard.

SCREENSHOT OF THE WEEK - Maybe this is where he got this costume. 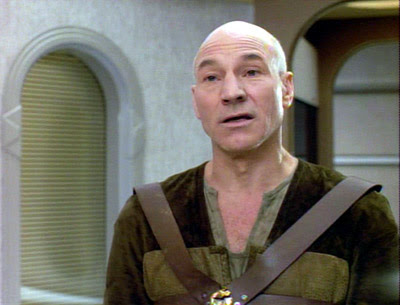 REVIEW: The first time I read it, the criticism I laid down at its feet was that it wasn't really a Trek novel because the characters weren't themselves for most of it. In fact, the majority of it reads like a fantasy novel. And this was too bad because Friedman is rather adept at getting us into the characters' heads (for example, Worf's impatience with even the inefficient multi-syllabic names we humans have). On a second read, that knack actually means even the long amnesia portions of the book still present recognizable characters. The earlier criticism is still valid though. This is more Workforce (Voyager) than Conundrum (TNG), and the medieval trappings, while presenting an alien culture adequately, really distance us from the setting. Worf does get to shine as a warrior berzerker, as does Riker in sole command of the Enterprise. But I have other misgivings, including the dissident subplot that fails to intersect with the lives of the heroes until the last few pages, and the preponderance of "magical" solutions to problems. The aliens look just like Data, making it easy for him to infiltrate their installations. Pulaski has an accident that cures her amnesia, then goes through a speech of being careful to find the correct dosage of light flashes to help others, only to have flashes in the sky from a meteor shower do the trick. Even the aliens get into the game, using their fancy transporters to kidnap people off weak and disabled ships, which apparently has given them 18,000 prisoners, not counting those that must have died. That's a lot of weak and disabled ships. Most ridiculous of all is the cure to the plague, which Pulaski manages by simply feeding the Conscripts' gruel to the patients. So the four conscripted away team members never got the disease, so what? The same can be said of more than 900 people aboard the Enterprise! So while I have a new respect for Friedman's character work in this book, its plot is still a mess.