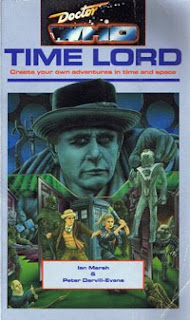 Tag line: Create your own adventures in time and space
Makers: Ian Marsh & Peter Darvill-Evans for BBC Books, 1991 (currently available as a pdf)

What is it?
Before there was Doctor Who: Adventures in Time and Space, and after the FASA Doctor Who RPG, there was Time Lord, the official Doctor Who RPG of its time. Even design-wise, it fits between those other two games.

Neat stuff
-Stats for every Doctor and Companion (including UNIT personnel) up to the 7th Doc, as well as for all the great (and not so great - the Tractators?) monsters and villains of the classic era.
-Some of the skills (called abilities) are a hoot: Bench-thumping, Cheat Death, Screaming, Serendipity, Gloating, MacGuffin, Pseudoscience, Resourceful Pockets... some of these are steeped in Whovian flavor (so much so a few of them show up in the new game!)
-Comes complete with a ready-made scenario, a sequel of sorts to The Daemons

Bad stuff
-There are no character creation rules in the core book. A Companion book fixed this, I believe, but as originally released, you could only play known characters. I'm sure you could build your own with what's here, there just aren't any balancing rules for it. An appendix tells you how to stat YOURSELF, which is a fun idea,
-The old school vibe this has doesn't really mesh with some of its more progressive ideas. On the one hand, you have open-ended abilities like MacGuffin and Serendipity and a strange "roll 2d6 and DEDUCT the results to get your number" (progressive only in that it's unusual), on the other, a crunchy combat system that uses miniatures, and a scenario that is designed as a dungeon "module" (with room descriptions, etc.).
-The art in the book is never more than acceptable and aside from a picture of each Doctor, there are no pics from the show at all. Disappointing in a licensed product.

Quote
"A cricket ball is an indispensable piece of equipment."

How I've used it
I haven't played the game, but as a sort of guide to the characters and aliens of Doctor Who, it's not bad. During the creation of my Unauthorized Doctor Who card game, I certainly had it close. Not only did I need it to get full overviews of some of the companions I knew less about, but I see now that I even pilfered some of the abilities for my cards' Traits (Gloating and Screamer specifically). Now that I'm going to be running a Doctor Who campaign, I'll certainly look at the included scenario again. Leave no idea unturned, I say. And with renewed interest in Who role-playing, I'll be able to use conversion notes to recreate some of the classic monsters that haven't shown up in the new series.

In conclusion
Even though there's a new game out there, it won't cover the classic series for a while yet, so Time Lord hasn't lost its relevance. The character builds should be easy enough to convert to the new system and there are a number of story ideas that remain usable. Just chuck the system. And I say that with all respect to the authors as this has a lot more to recommend it than pan it.
Doctor Who Reviews RPGs

Tyler said…
It's been a while since I read the book, but I seem to recall it had a funny sort of abstract system for gauging movement. The book recommended laying index cards on the table to represent particular locations' relationship to each other. That set-up may have tied to characters' ability to move from location to location. I remember the example involved Ian and Barbara fleeing from Daleks.
January 12, 2010 at 11:44 AM

Bare in mind that this was published when the price of books in the UK was still regulated and when the Doctor Who market abroad wasn't a major concern. If they had splashed on art, they'd have been lucky to either make a profit (at a low price) or sell a copy (at a high price).
January 12, 2010 at 1:48 PM

Hammer: And I'd rather have a good game with bad art than a bad game with good art. Nevertheless, if that's something people care about, it goes into "bad stuff".
January 12, 2010 at 2:06 PM

LiamKav said…
I'm curious as to the different stats the different Doctors have. Is one of them obviously the "worst" or "best"?
January 13, 2010 at 7:00 AM