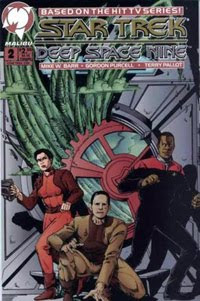 PLOT: The Cardassians claim ownership of the mold spreading through DS9, but Sisko believes Dukat just want to get his hands on a potential weapon or on an evacuated station. He further thinks Dr. Wembley's Gamma Quadrant artifacts on the USS Armstrong may be responsible for the mold's amazing growth. The Armstrong's Captain Johnson won't let Sisko speak with Wembley however, so as section after section is quarantined, he sends Dax and Odo to infiltrate the ship. They discover that Wembley died on the trip and that Johnson wants to make sure the old doctor gets proper credit for his posthumous discoveries before telling the world. The artifacts are NOT responsible, and it comes down to Bashir and Dax's deductive skills to find out the mold has spread from areas where children have been, and Jake fesses up to his tracking the mold through the station. A chemical on his boots provide a clue to neutralizing the fungus.

PANEL OF THE DAY - The triumphant return of Mr. Tricorder!

REVIEW: John Tesh and his amazing artifacts turns out to be a red herring, and the solution is technobabble, but thanks to the great art and on-point character expressions, it still feels like a proper DS9 story. Not one of the greats, mind you, but a serviceable one. These opening chapters I think do a good job of presenting the show as we know it, in a comic book format. So you have the various relationships and talents presented in various ways, from Sisko not wanting Jake to hang out with Nog, to Quark trying to make a fast buck and O'Brien running the transporters like a magician. Nothing original, but for comic book fans who don't know very much about Deep Space 9, a good primer to who these people are.
Comics Star Trek Star Trek Comics