Star Trek 1139: On the Edge of Armageddon 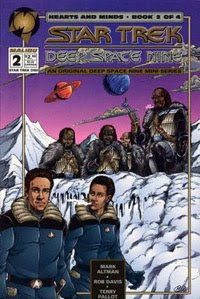 PLOT: As war brews between the Cardassians and Klingons, and the Federation negotiator has been killed in a sabotaged runabout, Sisko is mandated to bring the two sides to a peace. In the Gamma Quadrant, Dax and Bashir visit a couple planets in search of the K'Tang apparently destroyed (by Cardassians?) in the Abyss, a harsh frontier in which a legendary space bird is supposed to roam. Quark's sexy Seltari babe makes him a huge offer to buy his bar, but he refuses. And then she comes into the night and threatens to kill him if he doesn't...

PANEL OF THE DAY - Bashir finally gets tongue. 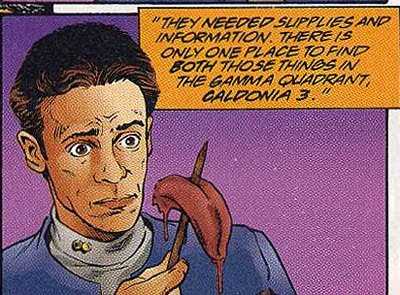 REVIEW: The mini-series surprises me by featuring three threads, where usually these things try to tell a single story. I'm not even sure how (or even if) the Quark storyline will intersect the Klingon stuff yet. Rob Davis does a good job with creating fun aliens and their environments, though I do wish his characters' expressions were a little better (don't want to compare to Purcell, but yeah, like that). Altman has injected a LOT of humor into his story, but with all the dead faces delivering the dialogue, it's all a little dryer than it should be, robbing scenes of their scripted levity. Quark fares a little better than others, but Altman's written comedy for many of the others and it doesn't always come across. Still, a good issue that takes care of the idling quest elements early (2nd rather than 3rd issue), I think resolving the "padding" issues the structure usually creates.
Comics Star Trek Star Trek Comics