February 09, 2010
Thanks to Doctor Who Magazine, we now know the titles of the next season of Doctor Who's first three episodes (mild spoilers below):
The 11th Hour (by Steven Moffat): A clever title, and wide open as far as what the story could be. We know it'll introduce the 11th Doctor properly, and Amy Pond entirely. So it has to be in 21st century England (probably London). The corresponding scenes in the trailer will be those with Amy in her police uniform. The stuff with the starter pistol(?) and the flickering light. It's Moffat, I trust him. 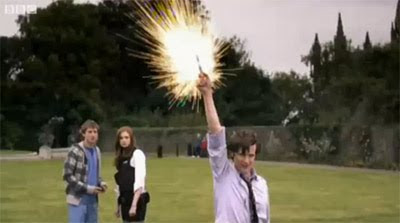 The Beast Below (by Steven Moffat): This could be one of a number of things. The vampire-looking stuff in the trailer? The Weeping Angels? (Nope, they're scheduled later in the series.) The reptilians? Probably not the former because it's all broad daylight (which doesn't inspire "below"), and IMDB's list of characters don't sound like they could be those reptilians, (who, from the look of their weapons, I'm hoping are redesigned Silurians or Sea Devils). Back to the trailer for clues... Is that Sophie Okonedo as the assassin with two guns? 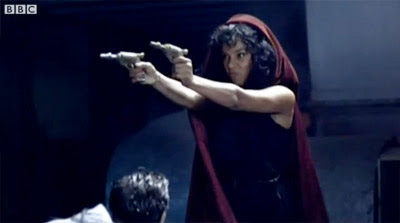 Victory of the Daleks (by Mark Gatiss): The first Dalek one-parter since "Dalek" in Series 1. The trailer shows the Doctor beating down a Dalek (in camo gear?) with its own suction cup arm. If any of the other scenes fit in with this episode, I can't really tell. Apparently, it takes place during World War II (do the Daleks change history and win it, fulfilling their destiny as space Nazis?) and the Doctor meets Winston Churchill (Ian McNeice). 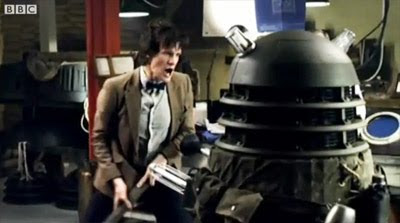 After that... A two-parter with River Song and the Weeping Angels, but that's another story... 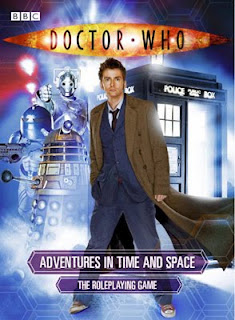 Every time I start thinking about Doctor Who too hard lately, I invariably come back to the Doctor Who: Adventures in Time and Space RPG. The spoiling of those episode titles has given yet another idea for an AITAS campaign. Imagine an alternative Season 32 game using the 11th Doctor or your own Time Lord in which your episodes are the same as Season 32's, and any spoiled details are the same, but YOU HAVEN'T SEEN SEASON 32! In other words, the game for GameMasters is to make their best educated guess as to what will happen in the forthcoming series and run their players through it. Half the fun is seeing how the 11th Doctor's series actually unfolds. Did you guess right? Did you take off in a completely different direction? Anything's possible!

So based on the three episode titles...
-My 11th Hour would be based around some kind of temporal anomaly that kept the last moments of a person's life in stasis. Can the Time Lord and his/her newly minted companions save those lives before time collapses and they are lost forever? And do the players even dare change preordained events?
-My Beast Below would feature the return (or prequel) of the Beast in The Satan Pit, corrupting a young woman and turning her into a living weapon.
-My Victory of the Daleks would feature an alternate timeline created by a single Dalek escaping the Void to turn England into a wasteland. The players will help an underground cell led by Churchill himself defeat it so they can get back to the TARDIS and prevent the timeline from occuring in the first place.

Then it's off to the future, with Weeping Angels and River Song. Vampires, Silurians, Van Gogh and other threats down the line. But that's me. How would you prewrite the series? Be quick! Once season 32 starts, it'll be too late to start this campaign!
Doctor Who Inspiration RPGs

Siskoid said…
That would be interesting, and I thought the Doctor would be stranded at one point in the Tennant run (I don't remember as the result of which cliffhanger offhand).

However, the trailer seems to cover a lot more ground. Ep3 has already been announced to take place in WWII.
February 9, 2010 at 11:20 AM