February 22, 2010
I was looking at a paragraph in the DWAITAS rule books about playing aliens and that you can't play a "good" Dalek, but what about an evil one? Then it hit me: Doctor Who Suicide Squad! 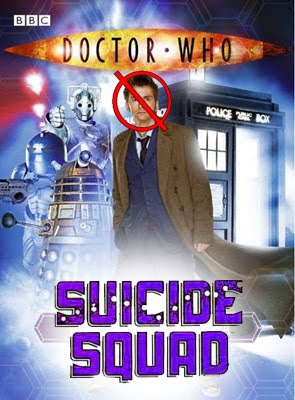 In this new campaign idea for the Doctor Who role-playing game, your players take on the roles of various criminals and rogues from the Doctor Who universe, forced to take part in missions by their wardens. These bosses could be anything from pre-Time War Time Lords or the Shadow Proclamation (someone can play the hardass Judoon captain in charge of the sorry lot), and part of the fun, just like in the Suicide Squad comics, would be trying to get the better of them. How can your manipulative Sabalom Glitz further his own agenda while also surviving the bosses' mission?

Doctor Who has lots of established villains you could pull out of history to serve a sentence as a Player Character, but I can hear you asking: Aren't most of them dead? It's the Whoniverse, so time travel has got to be a part of the equation. Have the Celestial Intervention Agency or whoever pull them out of time just before they are killed, and then return them (or a facsimile body) a frame later! Or create Your Own Characters(TM) thanks to the many evil, nameless, faceless creatures from across space and time. A dalek is a dalek is a dalek, and the same can be said of Cybermen, Sontarans, Zygons, et al. And it's not like their personalities differ much anyway.

An example Whovian Suicide Squad? How about...
A Judoon captain to keep the others in line (let's call him Ro Flo in honor of Rick Flag)
Count Grendel
Eldrad (must live)
Sharaz Jek (we need a loony)
And a Dalek (you know, for the diplomacy stuff...)

What would be your team of Whovian villains?
Doctor Who Inspiration RPGs Suicide Squad

James Ashelford said…
Whoniverse Suicide Squad, hand-selected by President Romana to do the dirty work she can't trust to Narvin and his CIA goons:

Commanded/kept in line by Leela (naturally)
Sabolom Glitz for savvy
Barbarian-era Ice Warrior for muscle
A Voord assassin for stealth
The Monk mostly for brains (also, comedy)
February 22, 2010 at 7:05 PM

James Ashelford said…
Oh no, Narvin is a character from Big Finish's Gallifrey audios. Very much one of President Romana's political enemies.
February 23, 2010 at 2:10 PM

Siskoid said…
Yes I know Narvin, I made a card for him and everything (at the actor's request actually).

James Ashelford said…
Sorry about that, talking at crossed purposes and all that.
February 23, 2010 at 4:41 PM