Doctor Who: The MMORPG

March 29, 2010
Settle down, kids, I'm not making an announcement here. A few months ago, the BBC had revealed that it was getting into the massive multi-player online game business, sparking speculation about a Doctor Who MMO, but alas, speculation is all it was. CBBC World seems to be the project they were alluding to, a virtual world aimed at children. But that doesn't mean we can't dream! As the countdown for the 11th Doctor begins, Doctor Who Week asks: What would a Doctor Who MMO be like? 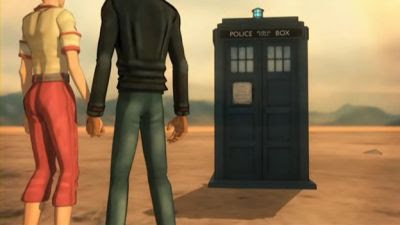 It's not an easy question to answer, is it? The Whoniverse theoretically contains all places and times and a few parallel dimensions and more than one timeline. The show itself features a pacifist and gives equal time to a super-powerful Time Lord and his relatively mundane Companions. How does that translate into an MMO comparable to what's on the market today? Perhaps some lessons can be learned from the pen and paper Doctor Who: Adventures in Time and Space RPG, which is as different from, say, D&D, as our MMO would be from World of Warcraft. Perhaps. Certainly, the focus cannot be on fighting and loot, at least not exclusively.

Instead of WoW as a model, let's take City of Heroes as a starting model. It's a superhero game, which shares one thing with Doctor Who - the already powerful central hero. Pen and paper supers games, at least those that emulate comics, are not based on "leveling", not should a Doctor Who game be. City of Heroes, however, does level your character, adding powers as it goes along in a most un-comic book-like way. Still, one might imagine adding abilities as experience is accumulated even in a Doctor Who game. A Time Lord might add abilities like Taunt, Confuse and Extend TARDIS Shields, for example. City of Heroes might also provide a model for how time-space zones are configured. In CoH, city areas, divided by appropriate levels of difficulty are cut off from each other, requiring load screens while your character is in a tunnel or taking public transportation (as opposed to WoW's incessant walking).

And for all that, we should still respect WoW's continued success with its more martial trappings. The Whoniverse does have UNIT, Torchwood and the Time War, so here's my vision... 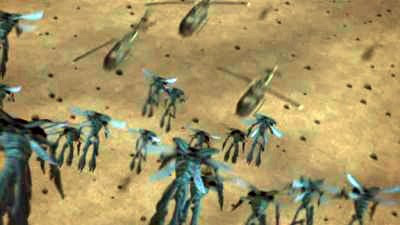 The game would be set in the Time War for a variety of reasons. First, it explains why there would be so many Time Lords and other time-traveling species moving about. Setting it in the present era of Who, there would be little justification for all the player-run TARDISes in the game. Secondly, the setting creates impetus for all manner of missions where combat may be required, and combat remains one of the most gamable elements of these games. Finally, this would also help design abilities for the characters. The Doctor's sonic screwdriver is all well and good (and multi-functional), but Time Lords participating in a Time War, might very well have more tricks up their sleeves - high level stuff like Time Stop, Fast-Grow Dinosaur Eggs (the Rani had this), etc. And while the War rages, there would still be room for helping people caught in the crossfire or simply down on their luck. If you arrive on Peladon and the King asks you for help, even if it has nothing to do with the War, would you say no? 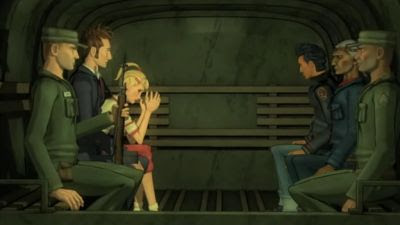 Different character types is a major component in the success of many MMOs, usually used to promote interaction between players who cannot complete missions with their limited abilities alone. Now, the game would work with only Time Lords, separated into Chapters just like on the classic series, giving them access to different abilities depending on whether they are scientists, soldiers, aristocrats or rogues. But I'd widen it further. You could also choose to play UNIT personnel with a time projector, or Time Agents like Captain Jack aboard a timeship, or Torchwood operatives (looters!) with access to a rift in space-time. In each case, a slightly different mode of time travel is used, and different abilities/gadgets become available, but the the same principles of game play apply.

And it wouldn't be Doctor Who without Companions. I'm of two minds about this. MMOs cannot work well if all character types cannot play solo (at least in the opening levels). Trying to think of Companion abilities that aren't "buffs" is rather difficult, which leaves me with two options. 1) Consider the Time Agents, UNITeers and Torchwood guys "Companions" whenever they are paired up with Time Lords. Or my preferred method, 2) make them NPCs run by a Time Lord/main character. Think of them as mounts or pets in WoW, or Away Team members in Star Trek Online. You would gain a Companion every X levels, would be able to choose from a variety of archetypes (cute screamer, computer geek, history teacher, etc.), complete a mission to "meet" them (of course) and then be able to use them in a variety of ways. You could leave them on the TARDIS, or bring them along to buff your Time Lord, be directed to toggle machinery, etc. The game engine could even be directed to kidnap them from time to time, triggering a rescue mission.

Moving Through Time and Space 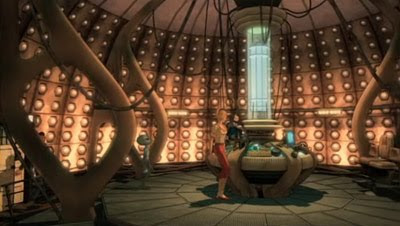 The TARDIS (or other time travel console) makes a good general purpose save point and options widget, but it's also how you move from one Space-Time Zone to another. As your level rises, the number of Zones you can move to increases, and more can be added by the design team as "patches" creating new points in history or planets in the universe where adventures are possible. The TARDIS itself can also be used to key off Time Lord abilities, whether that means materializing on top of your team in the middle of a battle or creating the Bad Wolf (obviously, some of these abilities are one-shot deals). Most Zones would be designed to hold many missions, or a single mission with multiple steps, so that revisiting is of interest.

Leveling
Leveling would work much as it always does in these things, with experience being accumulated as missions progress, new zones are discovered and enemies are defeated. I'd also throw in points for befriending NPCs. Increased stats, new abilities, equipment (or equipment abilities, and such things as Companions would be awarded according to "character type" for each level.
-UNIT Characters: These are the soldiers of the game, and would be awarded with increasingly sophisticated weaponry and tactics. They are consequently not hugely versatile as far as abilities (and time machine abilities) go.
-Torchwood Characters: The middle ground between UNIT and Time Lords, the TW guys have some fighting ability, but are often awarded with alien equipment, giving them versatility, but not a lot of power.
-Time Agents: Also a middle ground, but with more in the way of temporal effects than Torchwood (so closer to Time Lords) and less battle ability.
-Time Lords: Very week in combat (though they should have abilities that tend to circumvent fighting, like parlay), but with the potential for amazing temporal abilities and equipment from across space and time. And these guys would be able to regenerate! 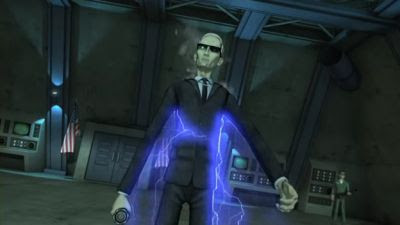 All these games have some scheme that allows characters to be resurrected when they die. WoW sends your soul to the graveyard and you must run back to your dead body. City of Heroes rematerializes you in a superhuman hospital far from where you were injured. Either way, there's a time penalty, but death is never permanent. I think the same can be accomplished with the TARDIS or other time machine. Time War Rules: Combatants are taken from a split second before they were killed and 'ported to their TARDIS. The time penalty comes from waiting for the machine to heal you from the low health from just before that last wound. You can storm out of the time machine right away if you like, but at the risk of dying very soon.

For Time Lords, there's an extre wrinkle. The same way City of Heroes gives you an extra costume at level 20, your Time Lord could suffer regeneration at certain points in its life. Players could then redesign their character's avatar from the ground up (and "respec" no doubt, even reselect your Companions), or they could hold off for later. The choice would be "stick to the avatar I've been playing with for so long" or change it and actually gain some bonus ability (to encourage you to respect the show's conventions). Perhaps other character types could have similar markers, but aside from rank, I'm not sure what the equivalent would be.

Playable? I'm sure. Designable? Aye, there's the rub, no doubt.

Radagast said…
I'm honestly not sure if it would work - Doctor Who to me tells intimate stories, this one man that pops up around the universe fixing things. 'Massively multiplayer' has far too large a scope for that.

You can roleplay the Doctor or an equivalent, if it's just the one or maybe a few; but I don't know how masses of Doctors, all running amuck, could maintain any kind of narrative cohesion.
March 30, 2010 at 6:02 PM

Anonymous said…
Well it's possible to have more than one faction to chose from wherever it be a timelord, dalek, cyberman or whatever, it could be based either b4 or during the time war for obvious reasons, but in a whole the whole idea of a mmorpg based on doctor who would be a really good idea and would be welcomed by a large number of doctor who fans so the support would be there, financially it would be a really good investment, i believe anyway with the number of fans that are so wanting to see such a game.
April 5, 2010 at 9:43 AM