What If... Aunt May Had Been Bitten by that Radioactive Spider? 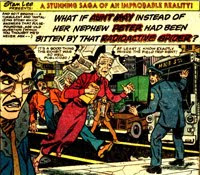 "What if Aunt May instead of her nephew Peter had been bitten by that radioactive spider?" is a silly bit of a tale from the end of What If #23, and yes, I realize I'm extending the life of this feature by gibing separate stories from the same issue each their post, but I only do so when they don't spin off the same concept. Sharp-eyed comics historians or those who are following along with their own books in hand, waiting for the bell to tell them to turn the page, will notice I'm not covering the Celestials/Eternals/Deviants/Inhumans stories in What If. Not that I don't love giant primeval Kirby monsters fiddling with human DNA, but these seem to be product of writers and editors who think this series is called Secret Diary of a Watcher. It is not. Let's stick to parallel worlds.

What If Vol.1 #23 (October 1980)
Based on: Amazing Fantasy #15
The true history: Oh I think you know it by now. Field trip to the science fair. Spider gets zapped. Spider bites Peter Parker. Parker gets to be Spider-Man.
Turning point: What if Peter Parker had forgot his lunch at home that day?
Story type: Silly
Watcher's mood: Out to lunch.
Altered history: Frail Peter Parker forgets his lunch and Aunt May rushes to the well-publicized science fair where SHE gets bitten by the spider. Not that she can recognize a spider on sight. 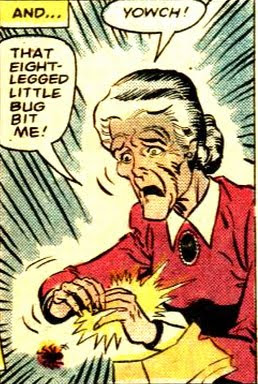 So she's hardly in a position to create web fluid, is she? However, she matches Peter's impressive (but not oft-touted) sowing skills and promptly creates a costume so she can earn money for the family doing stunts. 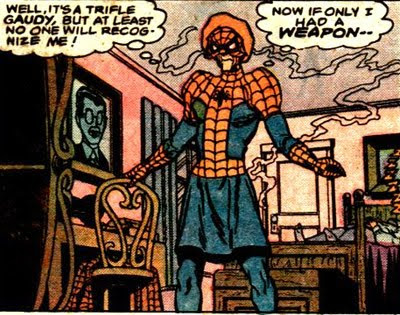 But web fluid is overrated, kids. When Leap-Frog puts in an appearance, May becomes a crime fighter, swinging on sowing thread and prayers. When it snaps and she must break her fall, she makes use of bread dough with too much yeast in it.

Nobody screws up a recipe like Aunt May! She defeats Leap-Frog and just then, Peter walks out of the house and sees this grotesque spider-like creature and faints. Ooops! I guess Aunt May is going to have to juggle her twin responsibilities of justice and caring for a sickly boy! 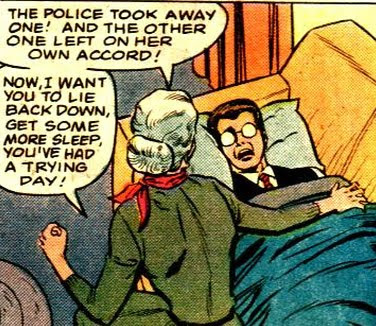 Here comes Mephisto now... And Uncle Ben, you ask? He slept through the whole story. No worries.
Books canceled as a result: Beyond a few issues of the Amazing Spider-Aunt, I'm not sure how much success this concept would have had in the Silver Age. Maybe once Aunt May gives Peter a blood transfusion or something, he could become the He-Spider-Aunt.
These things happen: No, no, they really don't.

Next week: What If Spider-Man Had Saved Gwen Stacy?
My guess: Kirsten Dunst would have been able to keep her natural hair color.
Comics Spider-Man What If?

Austin Gorton said…
I love that Aunt May has Peter resting while he's still wearing his sweater vest and tie.

generic viagra for men said…
Aunt May is the mother figure and aunt-by-marriage to Peter Parker (Spider-man). She's one of the most important people in Pete's life and we've already seen that he will do everything for her.