What If... the Man-Thing Had Regained Ted Sallis' Brain? 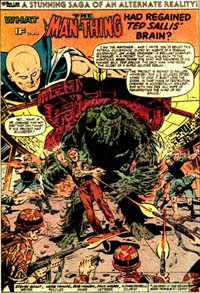 What If? #26 has a second story that hinges on a Man-Thing story you may not be familiar with. I certainly wasn't. Even the Watcher admits it's pretty obscure. He even feels the need to retell Man-Thing's origin despite the deviation not occurring anywhere near it. There's a third story too, but I'm not covering the Watcher's accounts of the Celestials, Deviants and Inhumans' early history. They're not What Ifs, and I have a serious problem with writers who think this is Watcher: The Series when I could have more Captain America States of the Union.

What If Vol.1 #26 (April 1981)
Based on: Man-Thing vol. 2 #1
The true history: Dr. Oheimer believed he could restore Ted Sallis' intellect to the Man-Thing, but he was accidentally shot by soldiers before he could manage it.
Turning point: What if Dr. Oheimer dodged a bullet?
Story type: Phoenix Forced
Watcher's mood: Knows he picked a lemon; standing by it 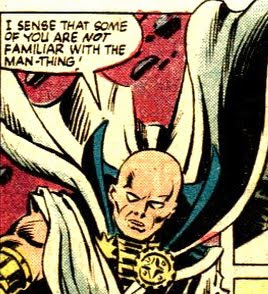 Altered history: Dr. Oheimer gets pushed to the ground by the Man-Thing and thus avoids being riddled with bullets. That gives the FBI a chance to offer him to continue his project as they foot the bill, hoping for supersoldier serum breakthroughs. Oheimer accepts and soon, he's got Man-Thing at "adolescent" level. I think he's over-estimating that myself... 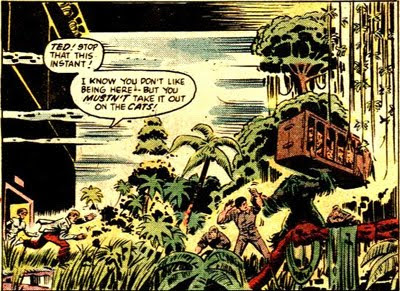 But in due course, he gets all of Man-Thing's nerve ganglia in a row and teaches the lumbering swamp heap how to type. 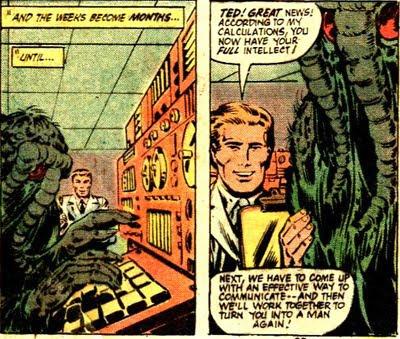 Now if he can only find a way for them to communicate... But wait, the Man-Thing may be smart, but Ted Sallis' humanity hasn't grown back! 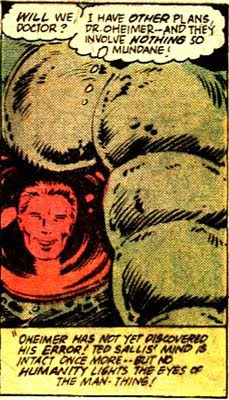 In the meantime, the FBI has been stealing samples from the lab and running their own super-soldier experiments. They've brought their stuff to the Everglades, cuz the samples are simply non-reactive without the Nexus of Realities close by, and once they think they have a handle on things, they pull the plug on Oheimer's work. And when I say pull the plug, I mean they burn his lab to the ground. Oh, and at first they put him in a Miami hotel room? And then they relocate him to Wisconsin! 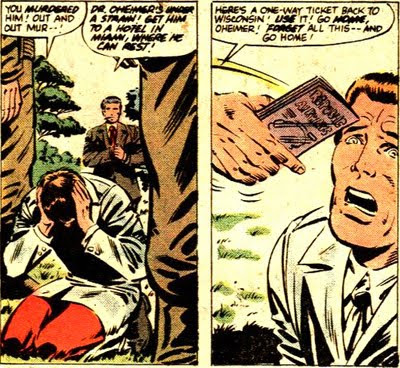 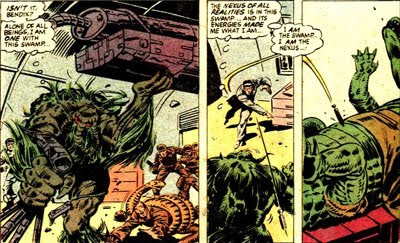 ...he CONTROLS the swamp.

But look up to the panels above. See that serum being accidentally injected into a guinea alligator? That turns it into the swamp's new defender! War ensues, and you know what intellect gives you, right? The ability to fear! And anything that fears, burns at the touch of the Man-Thing! 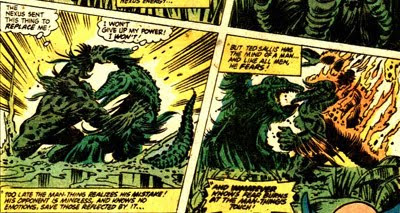 Yep, the new and improved Man-Thing self-immolates, and a new Man-Thing walks into the swamp.
Books canceled as a result: Any Man-Thing after vol.2 #1... Not an efficient use of a #1 issue, I know. I guess, the new series could be all about the Alligator-Thing. That's a big maybe. See, our protagonist doesn't have to be sentient, but so long as he once was, readers'll accept him. Law of the swamp.
These things happen: After Onslaught, Man-Thing gained the ability to speak, but that was a Franklin Richards-fueled hoax. I kinda don't walk to talk about Man-Thing after that.

Next week: What If Phoenix Had Not Died?
My guess: Everybody else does.
Comics Man-Thing What If?

Anonymous said…
Who wrote this story? Feels like a Gruenwald, and not just because of the Wisconsin reference.
April 10, 2010 at 7:36 AM

~P~ said…
That WHAT IF? story was written by Michael Fleisher, the same guy who wrote the story from which it deviated:
MAN-THING v2 # 1.

An excellent bit of sentimental cheese that brings a tear to my muck-encrusted eyes every time.