Brightest Day... Oh, You're Being IRONIC!

May 20, 2010
I know they're putting the Brightest Day banner on anything and everything that features one of the characters returned from the dead, and the Titans-Villains for Hire special features Osiris, but it's more than that, isn't it? Brightest Day tags the books that are leading to the eventual return of the Bronze Age current DC writers love so well. (Guys, I started reading comics in the Bronze Age. Have you LOOKED at those issues with your adult eyes lately?) I suppose there's a cost in blood for returning to those "brighter days". 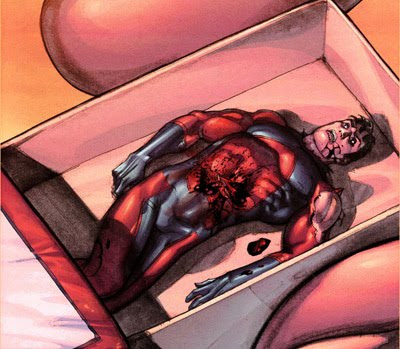 Now regardless of the "white washing of the DC Universe" killing Ryan Choi has become a part of, I quite liked the All-New Atom. More than I ever liked the Silver Age Atom. His adventures were wild and wacky, and his version of Ivy City was one I wanted to come back to again and again. And now he's dead, and for what? Just to set Ray Palmer back up as the Atom. No other reason.

The evidence:
-My interpretation of the Brightest Day "event" stated above.
-Here's an entire "special" that has no other function except the murder of Ryan Choi at the hands of people who have no personal connection to him (the fact the contract was paid for by lame-ass villain Dwarfstar is doubly insulting).
-Each time Ray Palmer is mentioned, they make sure to put him on a pedestal compared to Ryan.

You know what this means... 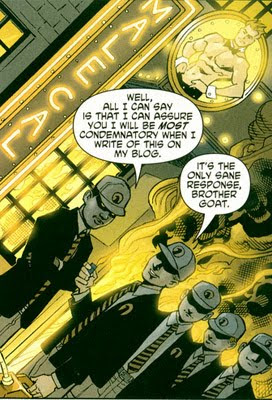 Matthew Turnage said…
I didn't get that special, so I'm bummed to hear that news. I was a big fan of the All-New Atom, easily one of the best superhero books on the stands when Gail Simone was writing it (I checked out early after she left - the magic just wasn't there).

Seems like a pointless waste of a great character, and I say that as someone who also likes Ray Palmer and is looking forward to his upcoming co-feature in Adventure Comics.
May 20, 2010 at 1:24 PM

Bubbashelby said…
I understand that killing a comic book character is like killing an action figure. Tomorrow we'll stand them all up again and start all over. But is it really necessary? Especially so soon after so many resurrections? Can't we just not write about a character for a while, or write them on vacation, or fighting crime on a desert island? Do they REALLY have to kill them?

Siskoid said…
There are two kinds of deaths for fictional characters.

Those that shouldn't be done because they are essentially gratuitous and pointless.

Sunglar said…
Siskoid, I must agree with you, I also began reading comics in the Bronze Age and the nostalgia for the characters of that period holds no attraction for me. I think this is one of the reasons I’ve stopped reading most comics. Sad to hear this because I Agree the new Atom was an excellent character.
May 20, 2010 at 5:52 PM

LiamKav said…
In some ways, the very medium of comics is what causes these issues. With TV shows actors age, they move on. You are forced to reinvent (The Next Generation), or at least reimagine (the last Star Trek film). You can't just churn out the exact same thing with the exact same characters for decades at a time.

It also doesn't seem to affect books quite as much, usually because they are the work of one author and that single person usually wants to move on. Unless there are an army of people out there desperate to reset middle-Earth to back how it was before the last War of the Ring.
May 20, 2010 at 10:11 PM

Randy said…
Personally, I was expecting something to happen to Ryan once Ray Palmer got back into the limelight.

Never was a fan of Ryan Choi actually. And it's really hard to get outraged over the death of a character I always felt never needed to exist in the first place.

De said…
I liked Ryan a lot and was beyond pissed when I finally read the Villains for Hire special. As Chris Sims pointed out on Twitter, the writer seemed to conveniently forget he had super powers. I have a hard time believing he couldn't just shrink down and give Slade an embolism.
May 21, 2010 at 11:15 AM

Paul C said…
Good point De. There probably wouldn't have been as much bad feeling about Ryan's death if he had been sent off in a better story that took into account the full range of his abilities.

I'm not neccessarily against killing off characters but it has to be for a good reason. If every character created after 1979 is fair game as cannon fodder for any random one shot then we have to wonder if there's any point getting attached to these characters.
May 23, 2010 at 2:09 PM