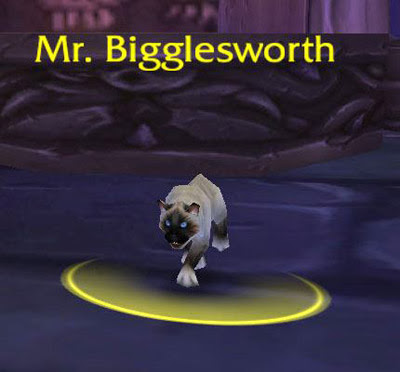 Name: Mr. Bigglesworth
Stomping Grounds: Entrance of Naxxramas, World of Warcraft
Side: Evil despite technical neutrality (ask anyone on a WoW BBS)
Breed: Birman house cat
Cat Powers: Said to be the last thread connecting Kel'thuzad to his mortal life. It is further said that any who dare to harm a hair on his head doom themselves to... something. (Seems to be getting yelled at a lot).
Skills: Eat 5, Sleep 0, Mischief 2, Wit 2, Attack the maggots and roaches that meander around the room 5
Cat Weaknesses: Despite rumors spread by some players, killing Mr. Bigglesworth has no effect whatsoever on any aspect of the instance. Lil' K.T. vanity pet ironic attack on sight.
The Epic Battle Continues: