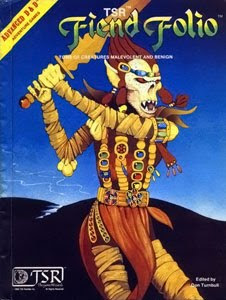 Oh AD&D Fiend Folio! You've got a lot to answer for! If you don't remember this venerable companion to the original Monster Manual, though it contained many cool additions to the Dungeons & Dragons multiverse, it also had some really whacky ideas - monsters based on puns, odd amalgamations of other creatures, and living traps with no semblance of an ecology. I suppose that's what happens when a bestiary is assembled mostly from White Dwarf readers' submissions. The Fiend Factory column might as well have been called Dial M for Monster. Thankfully, I really dig Russ Nicholson's art, and he's probably the reason I used so many critters from Fiend Folio in my teen years. Still, some of them are completely ridiculous. How ridiculous? Stick around... 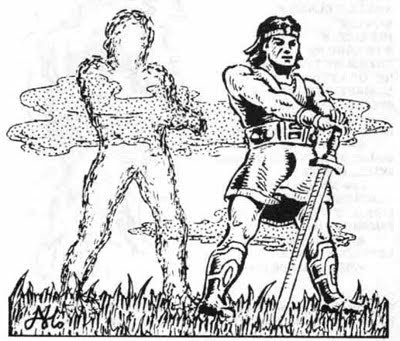 Not silly per se - it's a ghostly halo that follows someone around and gives them good luck - but the name hasn't aged well. Were it designed today, the Tween would be much, much, much more monstrous. 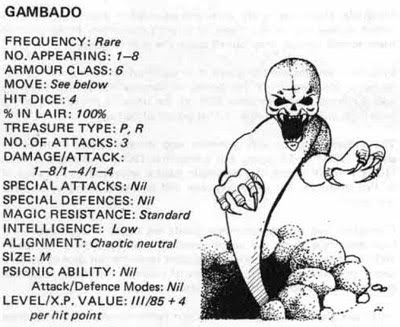 The Fiend Folio is full of living traps that look like they were genetically designed by Grimtooth the Troll. There's a flat fish with spikes in its back, and a cousin of the rust monster that disenchants items, and (gross) throat leeches... The silliest in my opinion is the Gambado (from the French gambader, "to frolic" WTF?). The adventurers see a skull on the ground, or a pile of skulls. What they don't know is that the skull is only the head of a devious creature whose body is basically a big spring. It bungees at them and snaps them back into its hole to be devoured. BOING!!!!! 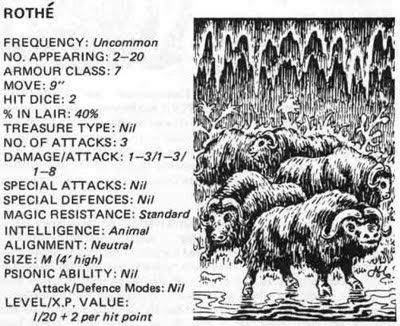 Toy water buffalo. They live underground, but there's no indication of what demi-humans might herd them or use them as steeds or whatnot. Nope, they're just tiny underground buffalo. Yep. 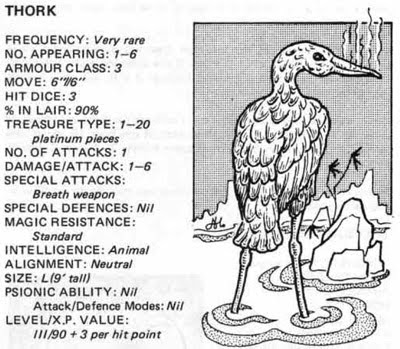 To me, this seems like a case of "found object". Guy (in this case, creator Mark Barnes) sees a copper stork in someone's yard, comes home and writes up a monster for White Dwarf magazine. The Thork, or "Boiler Bird", is a bird made of copper that spits boiling water at its foes. It collects platinum pieces and ONLY platinum pieces so raiding its nest can be worth it. One of nature's many niches. 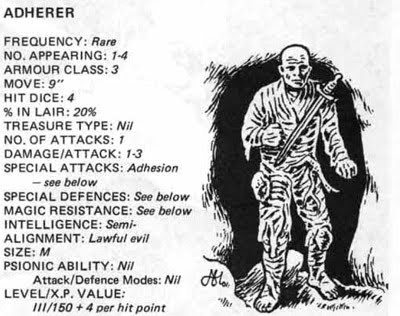 A mummy wrapped in sticky tape. I'd be evil too if I had stuff sticking to my ass all the time. So there's this armadillo with a precious ruby in its forehead, see? And the ruby turns into dust if it dies, though it can give it away if coaxed by a wizard. And it can will itself to die because it has no concept or fear of death. And it seeks out adventuring parties and telepathically communicates the value of its ruby to them. And then uses its low intelligence to somehow sow the seeds of discord between party members, attracting monsters all the while. Is this anything but a device to hose the PCs? And what PC would fall for it? As soon as the Carbuncle (way to steal the name of another animal, btw) tells the average party the value of of its gem, that's the end of its non-fighting ass. 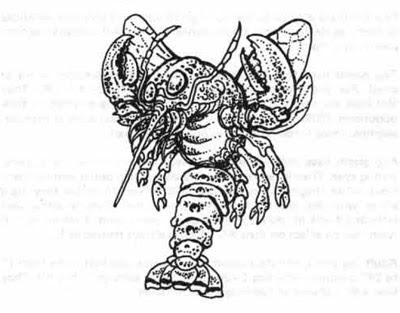 What do you get when you give a lobster butterfly wings? Imagine a crazy swarm of these things. Now imagine that they're 9 FEET LONG! Comes in two colors! 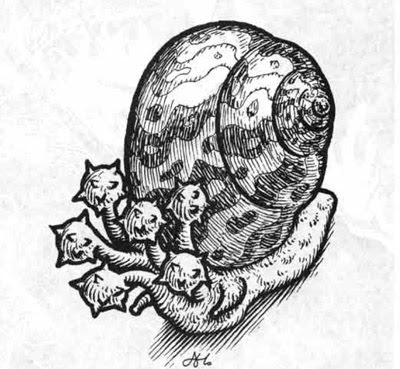 Hey! Flail rhymes with Snail! How in heck did such a creature ever evolve? (Answer: yeah yeah, they're all magical experiments gone wrong.) It's a giant snail with multiple flails instead of a head, for Pete's sake! And its shell acts as a robe of scintillating colors that deflects magic! Why am I still talking about it?! 'Nuff said! 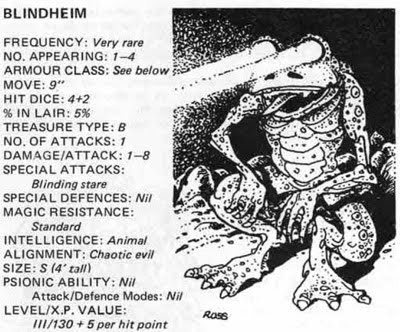 The Blindheim has a name as unlikely as its biology. It's a giant frog with headlights for eyes. Its main diet consists of deer. 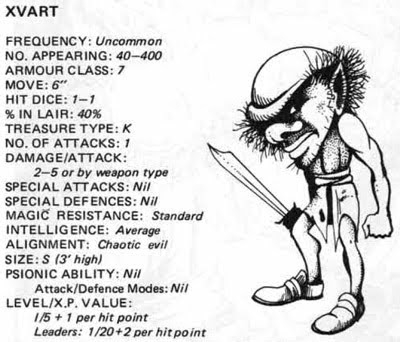 What if Smurfs were a D&D monster? These little blue men are exactly that. Chaotic evil Smurfs. They apparently delight in torture, so we can only guess at how their creator was exposed to Peyo's version. Gargamel was WRONGED!!! 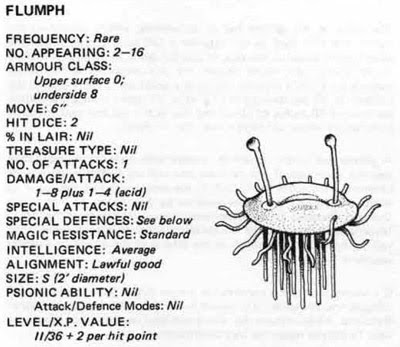 No surprise here! There can only be one #1 and it's the Flumph. This flat, floating, airborne jellyfish can emit a foul-smelling liquid and moves by sucking in air and blowing it out its behind. It is a flying whoopee cushion. And I wish I could give you permission to massacre the useless little things, but it's Lawful Good, so it's on your side. Maybe someone Chaotic can flip it over and disable it. My Lord, WHAT WERE THEY THINKING?!

Or perhaps you have other nominees? At least the book can't be called boring (a label I'd attach to the Monster Manual II) and they're not ALL bad. Next week: Fiend Folio's best and most enduring!
RPGs

FoldedSoup said…
You pick on Flail Snail at your Squirrel Girl peril!

Siskoid said…
Soup: Your nostalgia should remain intact. The book is still great fun to rifle through.

I'd say the most of them went exactly as planned, Siskoid.

Jon H said…
Some of these make me wonder if the "designer" was basically trying to come up with game stats for some weird little plastic toy figure he got out of a gumball machine and wanted to use as a monster in lieu of an actual gaming miniature.
May 24, 2010 at 1:04 PM

Doctor Futurity said…
I never cared for the adherer until it was revived in Pathfinder as a creepy mythosesque beast....now they're a staple of my games.
June 26, 2014 at 11:02 PM