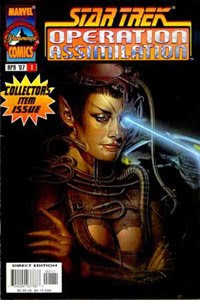 STARDATE: Unknown (between Conspiracy and The Neutral Zone)

PLOT: Romulan Commander Moliok is out putting down rebellions on the fringes of the Star Empire when an outpost calls for help. It is being attacked by an unknown enemy - the Borg. She is captured and turned into a Romulan equivalent of Locutus, and the outpost cannot resist.

CONTINUITY: The Neutral Zone featured both Federation and Romulan outposts "scooped out" of the ground, which turned out to be the Borg modus operandi in The Best of Both Worlds.

PANEL OF THE DAY - Your memories will be assimilated. 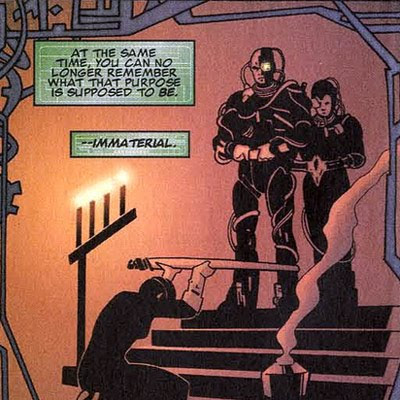 REVIEW: An insubstantial continuity plug-in featuring an unsympathetic Romulan (it couldn't have happened to a better person) told by Jenkins in an irritating 2nd person narrative (I hate that so MUCH). It's almost interesting to see the goings on of the Romulan Empire, there's really no story here. If the Romulan Locutus had been showcased in another comic, maybe. She isn't though, and we're left wondering why the Borg never came back to finish the job. It needed to be double-sized to do the concept justice and stands as a cheap First Contact tie-in to take advantage of Borg fever.
Comics Star Trek Star Trek Comics