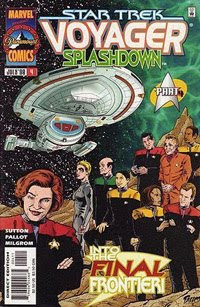 PLOT: As the drones swoop in to attack, Chakotay beams aboard the aerowing and then to the alien facility where he surprises the prospector and destroys the drones' control circuits. They crash into the sea. However, Chakotay's hit causes a cascade reaction that threatens to destroy the facility, and the away team in the crypts barely escapes the flooding. The gateway shows them the pyramids of Egypt, but Chakotay can't take the chance of ordering someone through in case it leads to another time as well as place. He throws a piece of his uniform into it which tourists in 2863 (the far future) ignore. Janeway plans to return the prospector's confiscated treasure to their rightful owners and to use the planet's geothermal energy to replenish the ship's power supplies.

CONTINUITY: See previous issues (Aerowing). The crypts are full of Vhnori corpses (Emanations). It is never made clear if the gateway was of Iconian origin (Contagion, To the Death).

PANEL OF THE DAY - Starfleet... They've seen it all. 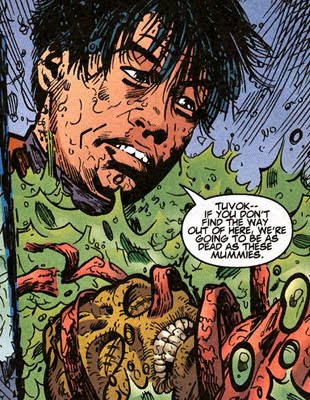 REVIEW: While the action beats are strong and the ending a properly inspirational "hero" speech, there are entirely too many questions left unanswered in the Splashdown finale. Was that gateway Iconian? Why was the script familiar to Tuvok (who was sure he'd seen them in the Delta Quadrant). Why was the prospector stealing Vhnori mummies? How did Voyager recover the treasure? What did they do with the prospector? Why wouldn't he give up his identity? Is there a reason for withholding information here? Perhaps at some point there were plans to pursue all this in another mini-series, but alas, the entire line collapsed. At least Voyager ends on a relative high compared to many issues of the series itself.

And this is also the last issue under the Marvel license. I'd like to thank editor Tim Tuohy for his many contributions in the comments sections of these reviews. It was very interesting to read about what was going on behind the scenes at Marvel Star Trek. I, for one, will miss his input as we enter the next phase of Star Trek comics - the Wildstorm issues.
Comics Star Trek Star Trek Comics

I would like to believe my first hypothesis is the accurate one.

Splashdown was to be followed by a four issue DS9 mini-series which in turn would be followed by another Voyager mini. This method of publication was agreed upon together by Marvel and Paramount. The time frame freed us from the pressures of the approval issues that had plagued us in the past.

A funny little thing about the last issue of Splashdown. There is a gold tunic wearing character that appears on the right hand side of the double page spread (pgs. 2&3)and on page 4. When those pages came in, my assistant Julio Soto asked how Terry Pallot knew what I looked like. I asked him what he meant and he showed my what was a shockingly perfect likeness of me! I immediately called Terry up and thanked him. He was not sure what I meant because he said that he drew himself as that crewman!!! Strange.

We truly had hit our stride with all of the books and I do mean all. Bobbie Chase's books, too!

It really was sad when we learned that the license was not going to be renewed.

It was a great honor to be a part of the Trek Universe, however small my contribution along with Julio's, Bobbie's and her assistant Polly Watson's may have been. We also could not have done any of it without our extremely talented creative teams.

It was a pleasure reading other people's opinions on books that touched them in one way or another. I was heartened that most of the comments were positive.