Star Trek 1279: To Take Arms Against a Sea of Troubles 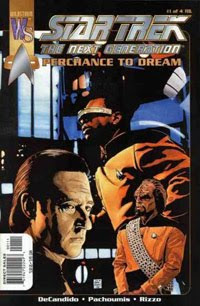 1279. To Take Arms Against a Sea of Troubles

STARDATE: Unknown (between All Good Things... and Generations)

PLOT: While Data has a dream that pushes him to consider installing the emotion chip, the Enterprise-D's crew attends the inauguration of the first Damiano governor to sit on the Federation Council. Worf is assigned to help with security (and soon disarms a bomb) because moral extremists want her dead before she can become governor, on account of her having only one sexual partner rather than two (the Damiano have three genders). With Starfleet security crawling over the entire site, the extremists turn tail and leave it all up to a sniper...

CONTINUITY: Data is using his dreaming software again (Birthright). He dreams of emotions and of the destruction of the Enterprise-D (both foreshadow Generations), and or Barclay in a red uniform. Spot has a fat cameo. Worf mentions a war between the Kressari (The Circle) and the Subytt (mentioned in Homecoming).

DIVERGENCES: Their is a TNG novel with the same title as this mini-series. Kressari is misspelled Kresari.

PANEL OF THE DAY - Deanna practices her Vulcan nerve pinch on Data... 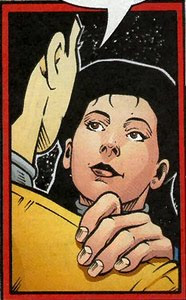 REVIEW: I can say I've liked DeCandido's work on Starfleet Corps of Engineers, but in Perchance to Dream, he's channeling a little too much of Howard Weinstein. Maybe I'm just burned out on "alien factions" stories, especially when they feature people we've never seen before. A real talkie to, but I guess a whole planet has to be set up. The artwork is filled with strong but stiff likenesses, and even the guest-stars seem to be photo referenced. At first glance, a slick product (like all the Wildstorm comics), but lacking a little life. And that's my main complaint with Perchance to Dream #1. Everything seems to be a little off. Pleasant enough, but ooh, it could be better. Attempts at humor are dryer than they need to be. Data's dream doesn't really connect with the plot in any meaningful way, and though it has potential for character development, it doesn't tell us anything we didn't know about the character. It becomes an excuse to name drop all the episodes in which Data's experienced emotions. And the threesome-o-phobia prevalent in the Damiano society doesn't sit well with me, reminding me of The Outcast, which is never a good thing. Star Trek has traditionally been awful at dealing with sexual orientation issues, and the trend continues here.
Comics Star Trek Star Trek Comics

De said…
This was Keith's earliest work within Trek before he would explode into the novels during the following decade. His work definitely matures following this mini-series.
June 9, 2010 at 10:24 AM