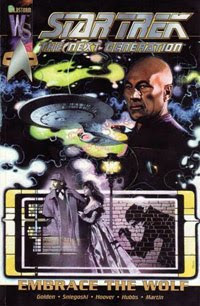 PUBLICATION: Star Trek: The Next Generation - Embrace the Wolf, Wildstorm Comics, May 2000

STARDATE: 47319.2 (between Force of Nature and Parallels)

PLOT: The Enterprise-D arrives at Enoch-7 just as Redjac causes an atomic apocalypse there. As the crew help the survivors, Redjac finds its way to the ship and takes it over, causing fear in various ways. He eventually goes to the holodeck where he recreates Victorian London and tries to see if he can make an android feel fear by beaming various crew members there and attacking them. Meanwhile, the Enochians have decided they can't allow Redjac to go free, so they attack the Enterprise. Before things get out of control, Geordi builds a containment unit to capture Redjac. Thanks to being distracted in the holodeck, Geordi successfully does so and the Enochians volunteer to keep an eye on the unit.

CONTINUITY: Redjac plagued Kirk's Enterprise in Wolf in the Fold and returned in DC's first Star Trek series #23-24 (at Enoch IV, which must be a stone's throw from Enoch-7). Redjac likes to hide in Data's Sherlock Holmes program (Elementary, Dear Data). In the simulation, Picard is made to wear his Hornblower uniform from Generations.

DIVERGENCES: The events of Star Trek #23-24 are not referred to, which makes the planet name seem coincidental. I've never really seen Worf go into an animalistic warrior's rage before. 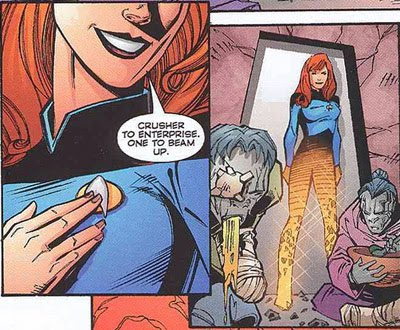 REVIEW: While Dave Hoover's designs are certainly interesting, the inking doesn't quite do them justice. Too soft and scratchy. And as for the writing, it leaves me equally unsatisfied. On the surface, the plot is fine, featuring a shocking beginning, a returning TOS enemy, and plenty of action and mystery solving. However, it's the characterization that doesn't work. The characters are either complete ciphers or obviously not acting and speaking like themselves. Worf goes mad with rage and attacks Picard and anyone else that moves. Riker spouts a lot of anthropological data. Redjac forgets he has the power to jump from person to person and stays inside the ship systems. It's all competent, mind you, but it doesn't quite rise above that.
Comics Star Trek Star Trek Comics

hiikeeba said…
Oh great! Another sequel to a TOS episode. They've made a sequel to every episode but Spock's Brain.
June 13, 2010 at 9:59 AM

Siskoid said…
Isn't this a sequel to a similar comment you've made?