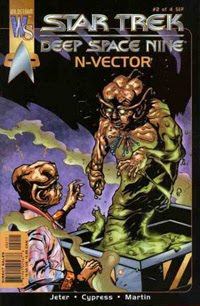 PLOT: Quark meets his vigilante benefactor, one Viqtor who helps him for his own mysterious ends, perhaps to do with the larval (or shapeshifting?) Quark in his trunk. O'Brien stands accused of sabotage, and the Romulan scientist reveals to Bashir that the Chief is not responsible. He was infected (on purpose) with the N-vector viroid, a Gamma Quadrant life form that jumps from host to host, takes them over and can even change their shape, and that works on both organics and technology. The Romulan wants back control of it and injects Bashir with a serum that can put him in a coma once the viroid infects him. However, Bashir was already infected, so didn't inject himself, turning on the Romulan and gloating about bigger plans...

CONTINUITY: See previous issue (Nog, O'Brien). The Bolian commander Jast will be killed on the Defiant in the first DS9 relaunch novel (Avatar). She also appeared in the previous issue.

PANEL OF THE DAY - O'Brien casts a big shadow.

REVIEW: The true villain of the piece is a blather of technobabble and though it's well explained, that's all it ever is. At least, it's devious. Not sure how it'll connect to the the other story, a borderline interesting Quark subplot. I wish we'd stay more with Nog, who has more casualties on his head after "sabotage" he missed does its work. The conflict between internal affairs hardass Jast and Colonel Kira has some fire to it, but Jast reminds me of Shelby, and not in a good way. Perhaps the series will pick up again now that the exposition's done, but for now, it's just another "Bashir possession/replacement" story.
Comics Star Trek Star Trek Comics