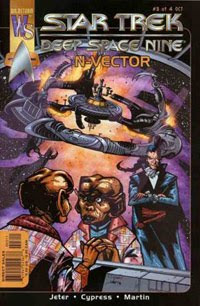 PLOT: The viroid has auto-repaired the station, so O'Brien is exonerated. He and Ezri notice that Bashir is acting strangely, and under the Romulan scientist's direction, they board the Defiant and sabotage it to attract the viroid. They capture Bashir, inject him with the antidote and free him from the viroid's influence. Meanwhile, Quark accompanies Viqtor in a shuttle to an empty sector where infected tech is released. It quickly turns into a viroid version of Deep Space Nine...

DIVERGENCES: None, though the art makes the Defiant incredibly spacious.

PANEL OF THE DAY - Please, don't be a litterbug. 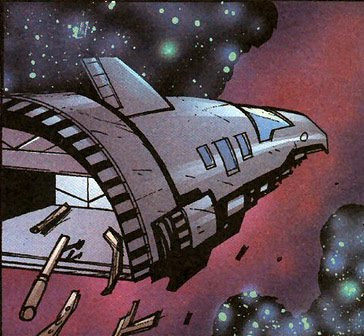 REVIEW: I'm having a little trouble understanding how the N-vector viroid works. Sometimes it uses you as a carrier, but disappears from your system once it is handed off. Other times, it multiplies itself and is at once in Bashir, in DS9 and in the stuff Quark is carrying around. I'm similarly unimpressed by how Kira plays the "guest admiral" by disregarding trusted crew members' claims that Bashir isn't himself (it's not like it's never happened). The best bit is the viroid turning into a DS9 that's half Heiger and half steampunk. What does it mean, where is it going, and why should I care are all questions that must be answered in the next issue... or else!
Comics Star Trek Star Trek Comics