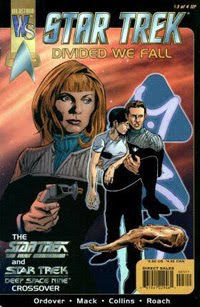 PLOT: Verad is on the run and spreading a retrovirus that is making all Trill incompatible with the symbionts, a death sentence for joined Trill. Ezri Dax and Lenara Kahn are in critical condition. Troi manages to disarm the Purists' bomb in the Caves of Mak'ala where Odan and other symbionts are taken care of. As Verad moves using the planet's transport system, he manages to infect three quarters of the population in short order and neither Crusher nor Bashir think they can find a cure in time to save the hosts. Verad kills himself rather than be captured, but has he left more surprises? On a hunch, Crusher goes back to the Caves and has the Odan symbiont inserted into her. She thinks its dying words about a cure meant that it was bringing a cure back to Trill when it was ambushed, not that it was asking for a cure... 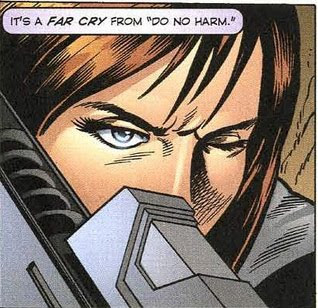 REVIEW: Often, the third chapter of a story suffers from padding. Not this time. Not only do things get more and more desperate despite the heroes' advances, but Ordover and Mack even go as far as killing a "name" character (Verad isn't hugely important in Trek, but it's still more than what is usually done in comics). It's a shocking moment, as is the realization that the Trill status quo may not recover. The characters get some good beats too, especially the women. Troi uses her empathy as a lie detector to find the bomb's disarm code. Crusher actually becomes Odan (that symbiont certainly goes around) and he deductive leap is well earned. There's also a nice bit with Data and a riot. The only thing that would make this better is the hint that Verad isn't exactly wrong about the symbionts' power base.
Comics Star Trek Star Trek Comics