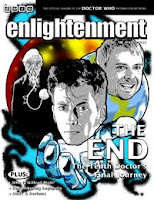 Sometimes, both frequent and occasional guests of Kung Fu Fridays pick something up in a bargain bin and make a donation to the Asian cinema pot. And so it came to pass that Bass, former artist of Sniper Ninja Bears, handed me Takeshi Kitano's Violent Cop this week. To you, sir, arigato. As for purchases, I bought the last 7 issues of Enlightenment, the Doctor Who Information Network's now 157-issue old fanzine. They're based in Canada, and Lance Parkin's re-published articles in Time, Unincomportated vol. 1 gave me an idea of the bimonthly zine's quality. At 5 bucks a pop, shipping included, I must say they're a good deal. I've read a couple already (between 20 and 28 pages each, generally) and they make good bedside reading. Looks like I'll get a subscription soon!

Spring is always dangerous because Amazon has a lot of sales. So now I own all 7 seasons of Mission: Impossible, finally reasonably priced for a product with no extras.

DVDs: Battlestar Galactica's third season is the biggest of the BSG boxed sets and the only full-length to season to get a single release. So it took me a little longer to get through. The season takes us from the New Caprica WTF!? moment to an even more extreme WTF!? moment as we enter the last act. It's probably the most hard-hitting season yet of the four, and a couple episodes are certainly in the running for my "Best" of 2010. The DVD includes commentary tracks on all episodes, sometimes more than one (you might want to avoid actor Mark Sheppard's on the finale, he just never says anything), as well as tons of deleted scenes, the Resistance webisodes, and "video blogs" in which everyone takes the piss. It's fun, sly comedy set around a show that has very little comedy in it.

Because we were walking the Relay for Life Friday night, we pushed our regular Kung Fu Friday to Saturday (but it's ok, because the Relay had a Ninja Leg - too early to skulk around though). The movie was a piece of 80s vigilante kitsch featuring Yuen Biao and Cynthia Rothrock entitled Above the Law (AKA Righting Wrongs). I can't recommend the story, or dialog, or acting, but Rothrock kicks serious ass and Yuen Biao has some very cool stunts. I guess that's why the Dragon Dynasty label carried it. One of the problems is that its mix of broad comedy and sadistic violence doesn't sit well with me. And if the central theme is that the system of justice doesn't work, it's undermined by how the movie just doesn't understand how the law works! And then there's the 80s synth music, usually a sure-fire way of bringing a movie's watchability down. The DVD includes a diverting commentary by expert Bey Logan, interviews with Yuen Biao, Cynthia Rothrock and Peter Cunningham, and a happier alternate ending that picks up the action much sooner than it should.

Books: Theatre of War is current Doctor Who editor and prolific writer Justin Richards' first Doctor Who novel, and it's a really good debut. His work is very plotty, and here has room to breathe, whereas I always find his 9th and 10th Doctor books just plot and no characterization. In this one, the 7th Doctor, Ace and Benny take part in an archaeological dig on a theater-driven planet. Richards plays with theatrical tropes, drops plenty of literate (though sometimes silly) references, and manages lots of twists, turns and surprises (though having read Martha in the Mirror before this means I've seen one of the devices before). AND it's the first appearance of the Braxiatel Collection. It's yet another hit on the New Series novels that a writer clearly good at writing characters and detailed worlds now writes and edits books too often lacking in them.

RPGs: No much movement on that front, as our Doctor Who game is stalled until the end of the month because of player unavailability. So we started working on the next phase of our gaming and selected Savage Worlds: Evernight as a setting/campaign. It means a return to fantasy for me, but I'm mostly eager to try Savage Worlds' pulpy goodness. We're all about discussing character concepts right now. More to come.