What If... Thor Battled Conan? Where's What If? #38, you ask? Well, it's really just a collection of stories from a possible future of the Marvel Universe, and none of them are truly What Ifs? Not even What If Sharon Carter Had Not Died? (She didn't.) These have an Armageddon 2001 vibe about them, although a lot more geriatric, but they're really What Wills? more than What Ifs? Not to say #39's "turning point" isn't incredibly tenuous, but it's at least based on an actual story and goes on from there. It doesn't pick up the thread 30 years later. Actually, quite the opposite. It picks it up hundreds of years earlier!

What If Vol.1 #39 (June 1983)
Based on: Thor Annual #8
The true history: After fighting Storm Giants, Thor follows Loki into a cave whose tunnels lead to other times. He finds himself robbed of his memory at the Battle of Troy.
Turning point: What if Thor turned left? (Not a Doctor Who reference.)
Story type: Conan Crossover
Watcher's mood: Book of Destiny 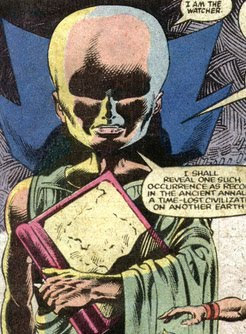 Altered history: Thor winds up in ancient Hyboria without his memory or sense of his full power. Robert E. Howardiverse or not, this is a Marvel comic, so the heroes HAVE to fight.

Miraculously, Thor doesn't grind Conan into a fine paste, but I guess his superhero ethics are still active. Impressed with each other's abilities, they become friends. Oh, Marvel misunderstandings! You're so kooky! Thor not knowing who he is, he follows Conan's lead and becomes a thief. 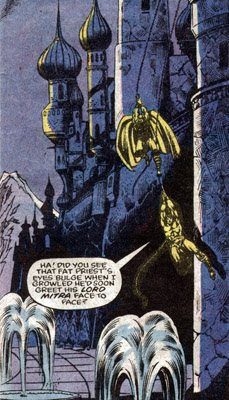 But he really wants to find out who he is and is drawn to Crom, the Hyborian Age's god. Conan's a good friend. He abandons plans to kick Toth-Amon's evil wizard ass to lead Thor back to Cimmeria where stands the mountain that serves as Crom's abode. It's unclimbable by mortals though, and Conan must turn back. 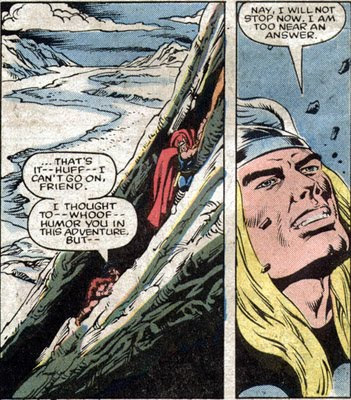 At the summit, Thor meets Crom, who is not a nice deity at all. Crom restores Thor's memory and tell him that he has no business tooling around in an Age before his own. They could have worked together to get Thor back to his home time, but no, Crom's a douche bag and throws Thor's hammer real far instead. 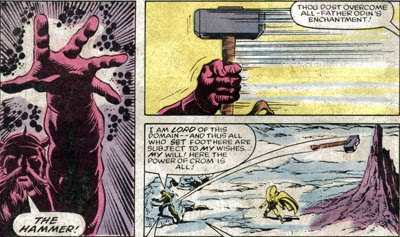 So now begins our heroes' quest to find Mjolnir. What they don't know is that Toth-Amon has retrieved it and is tapping into its power to create tsunamis and other storm-related effects. The people of Hyboria know a good leader when they're scared sh*tless by one. 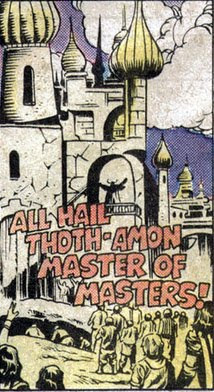 Thor and Conan eventually find their way there and storm the castle while Toth-Amon conducts a human sacrifice that will give him unrestricted power over the elements. He and Thor struggle for control of the Uru hammer, and lightning strikes them both down. Toth-Amon had it coming apparently:

Thor, for his part, dies a less dusty death, but he dies nonetheless. Or in Marvel terminology: "You will believe a god can DIE!!!" He leaves Mjolnir to Conan and asks him to take it back to Crom as proof that Thor won't interfere with his reign, and as a symbol for later deities that they should be friendly to humanity. Conan goes to the mountain and starts climbing... 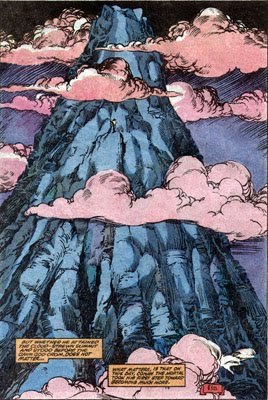 But the Watcher won't tell us what happens next. He does infer that Conan becomes a god. Crom really had it coming.
Books canceled as a result: And so goes The Mighty Thor into the night.
These things happen: I'm surprised these guys never met in standard continuity!
Further reading from blogosphere's distant past: Comic Nerd (2007), the Original ISB (2006).

Next week: What if Dr. Strange Had Not Become Master of the Mystic Arts?
My guess: Does it bug anyone else that he's a Doctor but only has a Master's degree?
Comics Conan Thor What If?

rob! said…
I love this one. I've always been surprised by how little Marvel had Conan cross-over into their main universe, considering he was one of their biggest stars. Maybe it was the Howard estate?

Siskoid said…
Unsure. The Conan universe did cross over into X-Men in the 80s (New York becomes a Hyborian world), but Conan didn't appear, I don't think.

Austin Gorton said…
@Siskoid: I really have to do a feature on that one some day, I really liked it.

I'd love to see it; that's one of my favorite comic book stories, period.

I know Spider-Man had some team-ups in Marvel Team-UP with Red Sonia, but I don't think Conan ever made an appearance.
September 2, 2010 at 12:26 PM

Taranaich said…
Man, these What-Ifs are always painful to read. It's bad enough Thor has to be nerfed to the point of mortality, but having Conan, a Cimmerian, being beaten at hill-climbing by anyone short of Spider-Man is practically a pieface to Conan. OK, Thor's a god, but come on.

Then Conan somehow completely forgets [b]his entire religion[/b] being based around Crom being the sort of god who will strike you dead if you so much as [b]pray[/b] to him? And Crom, being real, decides to spare these puny mortals' lives by simply chucking Mjolnir down to Stygia - where the freaking archdemon SET lives!?!

Siskoid said…
Well on the one hand, you're unhappy with Thor getting nerfed, and on the other, that he beat Conan in a physical challenge. You know what they say about pleasing people. ;)

Taranaich said…
If Thor kicked Conan's arse in combat (which I wouldn't mind despite being a massive Conan fan and only a vague Thor fan), I wouldn't mind him beating the Cimmerian in climbing. I just think of all the things they could've picked for Thor to beat Conan at - heavy lifting, running, leaping, whatnot - they had to pick climbing, which is one of the things Conan's best at.