Welcome to my first blog crossover! There's a cool, supportive community of comic book blogs out there and while I've always been happy to participate, I just haven't managed to because of that wretched "only 24 hours in the day" thing. The idea: Many of these blogs focus on a single comic book hero/series, so we thought it might be fun to off-road it for once and shill for a completely different series WE think YOU should also be reading. Now, me, I discuss a lot of different comics, admittedly mostly vintage stuff, but I suppose Star Trek comics have been a daily thing here for a while now. I am thus NOT going to be talking about IDW's Star Trek comics in this article. No, instead I'm going for a completely different IDW comic, one that doesn't even rely on licensed material (which represents most of their output).

I'm telling you that you should read Scott Morse's Strange Science Fantasy too! For at least 5 reasons...

1. Each issue is a big, groovy beat poem 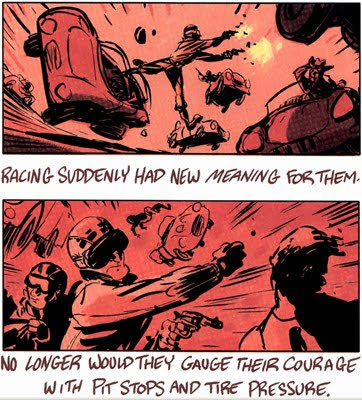 There's nothing like it on the stands. It feels like Morse is doing the comic book version of a jazz set. When his surreal story is about to end, he just takes off in a different, but completely valid, direction. Only in Strange Science Fantasy would a postapocalyptic drag race turn into a war tale where tanks shoot at elephants, only to later instill you with hope for the future via a lighthouse metaphor. 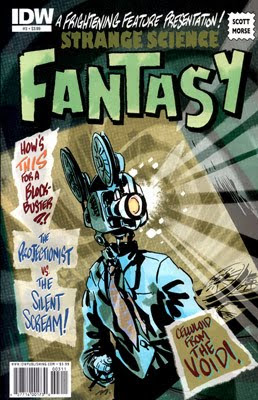 Though Morse is using prose over and under his images instead of more standard panel configurations, he nonetheless demonstrates a very real understanding of what makes comics awesome. SSF sits halfway between those strange short stories from the 1950s and Kirby's cosmic god oeuvre. There's something naive about these tales where anything can happen and "logic" is something that's only ever internal.

3. Those weird and wonderful characters 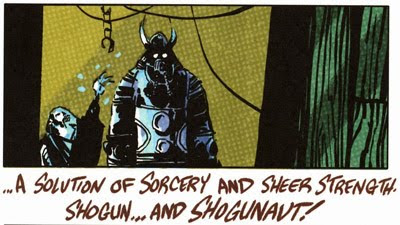 Headlight. The Shogunaut. Script Girl. The Projectionist. They're not only bizarre in a Doom Patrol kind of way, you also feel for them. There's something about Morse's expressive art that makes you care even though you're only with them for an issue's length (albeit one with at least 28 pages). I can't wait to see what he comes up with next. 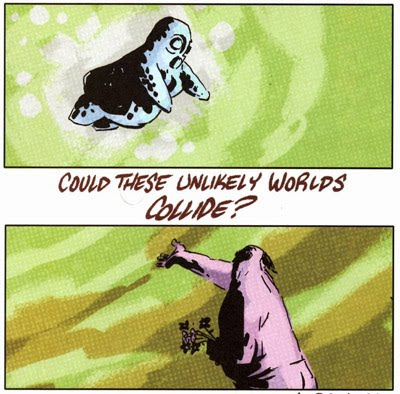 No speech bubbles. No multi-colored, icon-happy captions. No meanwhiles and laters. I've never been so happy to read narration because it doesn't cover Morse's really cool artwork.

5. A Paul Pope page in every issue 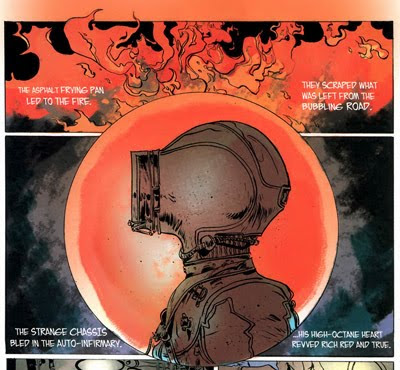 Paul Pope does an evocative piece inspired by the characters from the story at the end of every issue. Just makes me want to read more about them, and a beautiful piece of eye candy besides. When you think this comic can't groove any more, Pope proves you wrong with his bittersweet farewell.

So there you have it. If you like awesome comics like I do, and crave what I call a "pure comics experience", give Strange Science Fantasy a whirl. Issue 3 is out right now with more to come.

Interested in reading more? Good! Check out the lesser-known titles reviewed in these other blogs and "Read These Too!":
- Adam Strange at It's A Dan's World
- American Vampire at My Greatest Adventure
- Astro City at Speed Force
- Booster Gold at Red Tornado's Path
- Essential Man-Thing at Firestorm Fan
- Forgetless at Girls Gone Geek
- Franklin Richards digests at Once Upon a Geek
- Glamourpuss at Being Carter Hall
- Peter David's Hulk at Fortress of Baileytude
- Jonah Hex at Boosterrific
- Scott Pilgrim at Toyriffic
- Son of Tomahawk at Aquaman Shrine
- Spelljammer at HeroPress
- Spire Christian Comics at Mail It To Team-Up
- R.E.B.E.L.S. at Indigo Tribe
- Thor the Mighty Avenger at Aquaman Shrine
- The Unwritten at K-Squared Ramblings
- Welcome to Tranquility at Girls Gone Geek
- Zatanna at Red Tornado's Path

rob! said…
This is a great series. I would have covered this one is I didn't do Tomahawk and Thor. It takes something old and mashes it up with a new approach.
September 29, 2010 at 4:03 PM

Siskoid said…
And I might have done Thor The Mighty Avenger if you hadn't gone and taken it.

IADW said…
This looks like a great read! IDW takes a bit of hunting out this far south but it looks like it has just the kind of pulp feel I like!