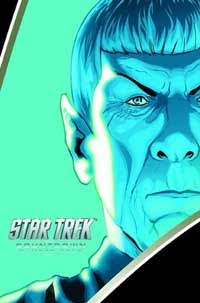 PLOT: The Klingons prove no match for Nero's ship and the Romulans ask for Worf's surrender. Worf instead stages an attack on Nero's hull, getting himself and several warriors aboard. Fighting ensues, but Worf ends up getting impaled on a mechanical tentacle. While Spock heads for the supernova, the Enterprise-E flies to Worf's help. Nero claims Worf still has a flicker of life and gets the Enterprise to lowers its shields so he can beam Worf over. He does, even as he blasts at Starfleet's flagship, but the Enterprise survives. Nero doesn't stick around however, and reaches Spock just as the supernova is destroyed by the red matter singularity (a black hole that works like a temporally shifted wormhole). Both ships are sucked into the anomaly.

CONTINUITY: See previous issues. At this time, Klingon ships can fire while cloaked. The series ends where the film begins.

PANEL OF THE DAY - Never try to cross from one page to the next. 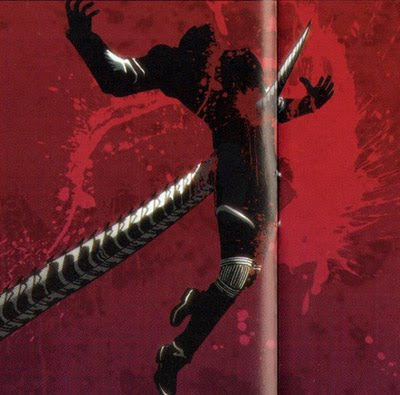 REVIEW: Worf's (near)death is a big shocker, but they leave it hanging as to whether he survives. It's odd, but it's like they decided to keep the 8-years-on TNG guys alive for further adventures. Is it worth it? Hasn't the new Star Trek obviated the need for a sequel? Not that I'd mind seeing this timeline again. Still, kinda chickened out of Worf's death there. Or were the writers not allowed to kill off anyone? Could be. In any case, a strong finish showing Worf's courage and Data's friendship, even if the last few pages were pretty much a given if Countdown were to reach the film's beginning. I haven't really said anything about Messina's art yet, but I've liked him since the Klingon mini and he's grown a heck of a lot since then. A lot more detail, awesome ship fights and stronger likenesses (just look at those covers).
Comics Star Trek