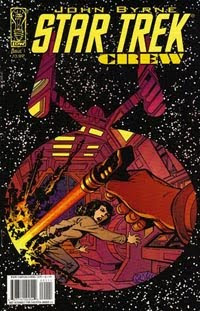 STARDATE: Unknown (8 years before The Cage)

PLOT: When Number One was a cadet, she took part in the NX-0002's shakedown cruise. That ship was destined to become the NCC-1701 USS Enterprise. The skeleton crew of cadets commanded by a dunsel by the name of Admiral Rasmussen were ambushed by a Klingon cruiser in an asteroid field. At the same time, the NX-0002 was sabotaged by Klingon agents who had taken on the identities of various cadets killed on Earth. Most of the crew are killed, but Number One devises a plan to distract the cruiser with remote piloted shuttles, while she flies another shuttle to ram into the cruiser's weak points. The maimed Admiral Rasmussen takes her place aboard that shuttle however, intent on being remembered for something and successfully cripples the Klingon ship. Number One and the engineering crew repair the NX-0002's damage and destroy the cruiser. Later, Number One makes sure the record shows Rasmussen was the true hero of the day.

CONTINUITY: Before being baptized Enterprise, the ship was simply known as NX-0002, meaning it was the second ship of the line (possibly after the Constitution itself). Events take place when Number One (The Cage) was a cadet. Dr. Boyce is already ship's doctor.

PANEL OF THE DAY - The first Star Trek autograph 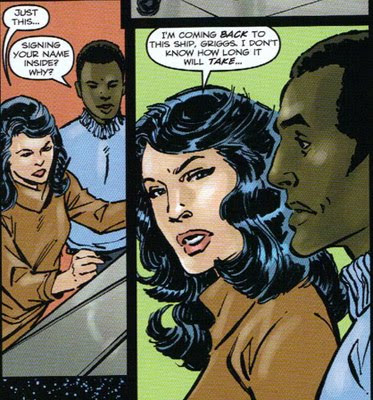 REVIEW: Crew must be the worst title for any Star Trek sub-franchise in history. Wow! Could it be any more generic? Since the series will follow Number One's early career, it's not even particularly accurate. Star Trek: Number One #1... could have been fun. Or First Days. Or almost anything else. Ah well. But you can't judge a book by its title. Crew #1 is the same kind of good fun Byrne has been dishing out with his other IDW work. The adventure is self-contained, though part of a greater arc. It adds new information about the very early days of the Enterprise, and the focus on the mysterious Number One (Byrne plays with the fact we never found out her name in canon) makes sense. She's a proper hero here, and the action both clever and exciting. Plus, Klingons. That's cool too. Good art, fun story, a typo in the lettering (oops)... Overall a thumbs up.
Comics Star Trek