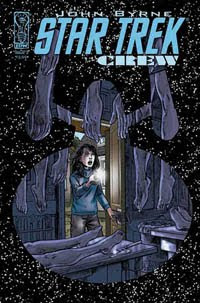 PLOT: As a Lieutenant (j.g.), Number One served on the USS Ventura. When the Ventura visits a lost colony near the Neutral Zone, they find a lifeless dome under which stands a 1960s town. Before Number One's landing party can investigate the 500 graves outside the dome, the townsfolk appear, but don't register as lifesigns on the tricorder. They capture the landing party on "D-12"'s behalf and send copies of the party up to the Ventura to try and get the entire crew to beam down. Number One helps her team escape, and she finds an android laboratory. The robot D-12 accosts her and explains a colonist gave him higher intelligence long ago and the mission to keep the settlement alive even after the childless colonists were all dead. He recreated them and even gave them children, but would rather populate it with the Ventura's crew. Number One zaps him with a tricorder power pack, which shuts down all the androids. Three months later, Number One is promoted to full lieutenant and transferred to the Enterprise.

CONTINUITY: See previous issues (Number One). The tricorder is brand new technology at this point. The colony was founded by 500 humans who left Earth after the Eugenics Wars (Space Seed). Their ship looks to be the same model as Khan's.

PANEL OF THE DAY - When robots get philosophical.

REVIEW: A very 60s story you could easily imagine as part of the original series. It's even got the Paramount backlot! Perhaps that's why I'm ready to excuse the robot talking about using the colonists' DNA to build mechanical copies of them, because it stands as a homage to the weird science of 60s television. Number One is once again a resourceful character, and we learn she's earned at least 40 commendations to date. She's a woman of action and intellect (sometimes gets compared to a Vulcan) who routinely out-performs more senior officers. Each issue is dedicated to the memory of Majel Barrett Roddenberry, and "Crew" could hardly be a better homage to the lady. Byrne is turning Number One into a real powerhouse. This time, her captain doesn't die, but it looks like he does at one point. Continuing the joke without going overboard?
Comics Star Trek