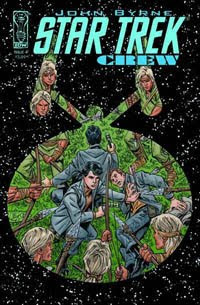 STARDATE: Unknown (follows the last issue; it's been 5 years since issue #1)

PLOT: As a Lieutenant, Number One arrives on the Enterprise along with other transfers. Almost immediately, the Enterprise goes through a powerful transporter wave that shakes the ship. Number One's first contribution is to find a way to get to that beam's original end point. They follow it to a planet where five warlike villages inhabited by English-speaking humans are perpetually at war. Investigating, Number One is captured by some of the warriors and she discovers that they are clones sent here by Gary Seven back in the 20th century. They only know war, and this system is working for them. The Enterprise sends a party to rescue Number One, but "Earth Control" (this era's Starfleet Command) tells the ship to leave it alone and that another ship will take care of studying this society.

CONTINUITY: See previous issues (Number One). Number One now serves on the Enterprise and meets Lt. Commander Pike (The Cage). They serve under Captain Robert April who is married to his Chief Medical Officer, Sarah Poole-April (The Counter-Clock Incident). Commander Stone may well later turn out to be Commodore Stone (Court-Martial). April may have started the tradition of calling your XO "Number One". The clones on the planet got there via Byrne's Assignment: Earth #3. The coda teases us as to the end of the Assignment: Earth saga, with Roberta Lincoln disappearing with a black cat on the eve of her 91st birthday (as told in books written by her granddaughter).

PANEL OF THE DAY - The Enterprise's fresh pine scent. 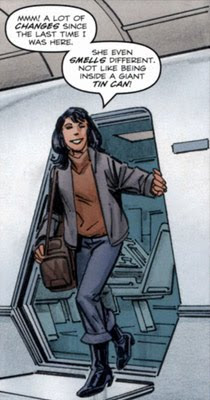 REVIEW: Seeing the characters we know board the Enterprise is actually a thrill, as is the husband and wife April team. There are some great visuals, like the giant chickens the clone soldiers ride, and it's a real hoot to hear a crewman complain that he's been shot by an arrow, of all things. Good action, etc. However, this is the first issue of Crew where Number One is a little less of a player. It's still her story, but she has to be rescued from her predicament, rather than being the engine of her own escape. She impresses April early on with her deductive skills, but somewhat fails in the action department. This isn't really a problem in that Pike has to become the action hero on the ship, lest she get promoted above him. Makes sense. Byrne uses this issue as sequel to one of his Assignment: Earth issues, and it feels like he sets up the clones for a return in some later mini. I don't mind the involved continuity between his projects, but then, I'm reading them all in order. Not quite satisfying for readers who might have read this, but not A:E. It also sets up a mystery involving Roberta and Isis that he might get to later. Intriguing.
Comics Star Trek