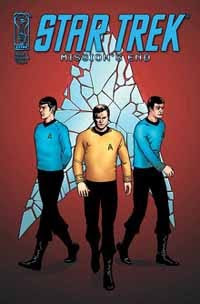 PLOT: The Enterprise is participating in the first contact mission with the spider civilization of the artificial planet Archernar IV with a survey team commanded by Captain Cassady (who seems immune to Kirk's charms). In the jungle, Kirk's party is uncharacteristically attacked by giant bugs the spiders use as pets, mounts and food. After that survey, they meet the Archernarians, and Cassady is instrumental in getting them communicate. They are invited to a dinner where once again, a bug attacks. The Archernarians think this is great sport. Meanwhile, Spock has been looking at the planet's power core and the Archernarians' efforts to unlock its power and turn the ancient station into a ship. Kirk believes they have the potential for either exploration or destruction...

CONTINUITY: Kelso and Gary Mitchell (Where No Man Has Gone Before) are in the crew. Sulu is in Science blue as per his first appearance in WNMHGB. This is apparently the first mission where Kirk can test his crew's teamwork.

DIVERGENCES: A female Starfleet captain in this day and age? Janice Lester got it all wrong (Turnabout Intruder).

PANEL OF THE DAY - Reality TV is no longer a "human thing". 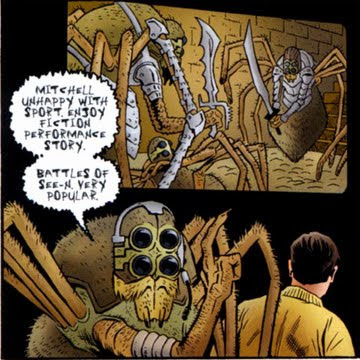 REVIEW: Steve Molnar has fun drawing environments and critters, complementing well Ty Templeton's story of Kirk's early days on the Enterprise. The characters he brings into the fold are well used, with Uhura showing off her translation skills, Mitchell roguishly dismissing his friend's orders, Kirk being a little more serious than usual perhaps nervous for his new command, and Spock mistrusting Kelso's emotional state. Captain Cassady is an enigma, unimpressed by Kirk's macho bravado and making sure she owes him nothing. The spiders are an interesting race too, standing on the edge of both comic relief and potential villainy, and anthropological detail is used to good effect in their first contact. How is this "mission's end"? Well, the next issue propels us to the end of the five-year mission, as the spiders become relevant again. Sort of manufactured bookends to Kirk's deep space assignment.
Comics Star Trek