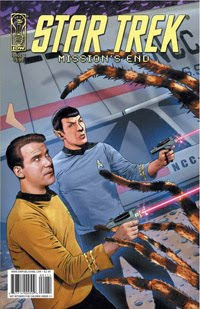 PLOT: More than four years after first contact, the Archernarians want to join the Federation, but internal factions are ready to rebel to prevent it. Despite Section 31 intervention, the rebels make a move 6 months later when Kirk and Cassady - the latter now an Ambassador - return to the planet to sign a treaty. The rebels have somehow intuited how to use their artificial world's power core and use it to destroy Starfleet's survey station. The Enterprise narrowly avoids destruction and Kirk beats the rebels back. The treaty is supposed to go on as planned, while McCoy is sent into the jungle with his team to find a medicinal plant. There he meets one of the giant grubs the Archernarians use as pets/food, and it can talk...

CONTINUITY: This is the last mission of Kirk's 5-year mission. Sarek (Journey to Babel) and Admiral Nogura (The Motion Picture) appear. Section 31 first appeared in Inquisition. Other than visiting the Yonada (For the World Is Hollow and I Have Touched the Sky), McCoy has no plans for the future.

PANEL OF THE DAY - That's cold!

REVIEW: IDW does a lot of short stories, but this one'll actually last the whole 5 issues, despite the 5-year jump. It's unfortunate that it's a "planet with fighting factions" story, but only because I burned out on those in other series (you might remember my railing against Howard Weinstein). For now, the mix of interesting critters, quick action and Kirk NOT getting the girl is entertaining enough. I'm particularly intrigued by the Section 31 subplot because Mr. Moore acting as the Enterprise's navigator seems to be the same guy manipulating affairs 6 months earlier. What kind of role is he to play? Staying tuned.
Comics Star Trek

De said…
Do you mean Jose Tyler instead of Kelso? Kelso didn't appear onscreen in The Cage (it might have been established he was there in one of the later TOS novels but I'm a bit behind in my reading). Both were young, blonde men who looked rather similar and wore the same style uniform, so I can definitely see the confusion.

Lee Kelso's death was pretty clear in Where No Man Has Gone Before when Gary Mitchell telekinetically strangled him.
September 10, 2010 at 10:38 AM