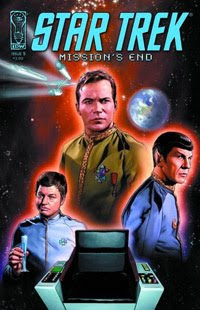 PLOT: Kirk, Cassady and Spock find the crawlers holding McCoy's party and open negotiations with them even as the planet seems to be collapsing into a mess of metaphasic energy around them. They strike a deal, and the crawlers return to the city with the missing pieces of the planetary generator. McCoy reveals to the leader of the spider-people that the crawlers may have made evolutionary jumps due to their proximity to the energies of the "Eye of God" where they had been put to work. The spiders feel badly that they treated a race uplifted by God as animals and vow to work with them as equals. The generator is repaired, but its energies are still about to send the planet to another dimension, that of the "builders". They are ready to leave and thank Starfleet for putting them on this path. Kirk's shuttle escapes to orbit where the Enterprise is surrounded by an Orion fleet, which is soon destroyed when Archernar IV disappears into a destructive singularity. The Enterprise of course escapes and is soon on its way to be refit. Cassady is finally ready to go out with Kirk, but he has to decline because he plans to promote her to starship captain and doesn't want it to look like a sexual favor - he's accepted the Admiralty. His leaving causes Spock and McCoy to leave too. McCoy's been through enough and needs a break, and Spock feels guilty over his logic almost having resulted in the doctor's death (had Kirk not woken up and changed tactics), and wants to purge all remaining emotions through the Kolinar.

CONTINUITY: See previous issues (Section 31, Arex). Kirk's first order as Admiral is to lift the unofficial restrictions against female starship captains (Turnabout Intruder). It seems that they could get the rank, but not those exact postings. The Enterprise is to undergo a refit, most of the bridge crew will stay with it, Kirk becomes Admiral, Spock and McCoy leave Starfleet (The Motion Picture).

PANEL OF THE DAY - Final entry 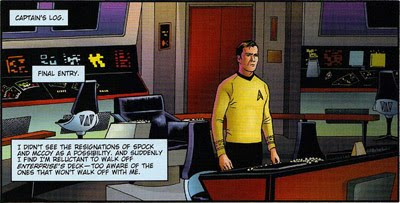 REVIEW: The only thing that remains unresolved at issue's end is the truth behind Lt. Moore. He's got some kind of hold over the Orions and may be a Section 31 agent, but once the Orions are out of the way (which really makes me wonder what the point of their involvement was), we never hear from him again. Will Templeton revisit this character in some later story? I hope he will because I quite like what he's done with his piece of the Star Trek universe. Aside from the Moore mystery, it's a great issue. The spiders and crawlers find an unexpected peace that makes neither of them the villains. They remain sweet and charming despite their looks. Cassady's final fate is worth a smile, and I like that Captain Macho is the one who lifted the ban on female starship captains, even if I'd rather that piece of 60s sexism had never existed. Perhaps there was a wave of sexism in the 2260s as well (I mean, mini-skirts?). And the final pages, as the Enterprise empties out and the three friends so central to the show go their separate ways, actually manage to be both touching and relevant to this last mission. Strong material, and very nicely illustrated too.
Comics Star Trek