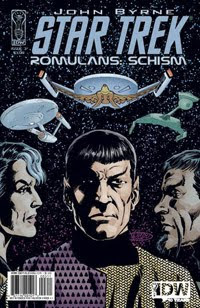 PLOT: When Kor's ship hit the Yorktown bridge, the Praetor's warbird beamed off everyone involved. Now Number One's bridge crew are captives of the Romulans, but Kor's accusations of Romulan treachery may hurt the uneasy alliance between the two empires. Out in space, Koloth has found the wreckage of Kor's cruiser, and soon, the Yorktown decloaks more or less intact aside from the bridge and under auxilliary control. The Romulan fleet arrives for the kill, but Koloth takes exception to that and attacks the fleet. Three Starfleet ships then arrive to save the Yorktown and the USS Constitution beams the Starfleet officers off the warbird. The Organians show up to reestablish their magical treaty - it was obviously too soon to let it slip - and it now includes the Romulans. The Praetor is telepathically shown by the Organians that his vendetta against Kirk was a Klingon ploy. The Klingon emperor considers this a great failure on Kor's part and sentences him to 70 years hard labor, while the conspiratorial Koloth and princess are to be put to death. The princess gets it in the back, but Kor then intervenes with a lie about how he directed Koloth to get in good with the princess to protect the emperor. The two friends are released with promotions. On Romulus, the Praetor is catatonic after having lost his reason to live, and his pregnant wife takes command of the Empires until her child comes of age. Her first edict is to expel Klingons in Romulan territory and put an end to their alliance.

PANEL OF THE DAY - My nerdy figurine collection 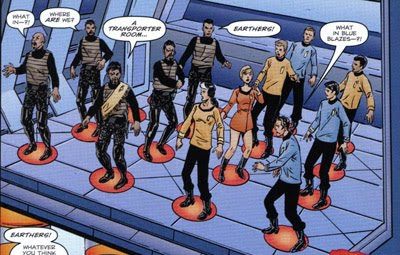 REVIEW: A LOT happens in this one, satisfactorily concluding Byrne's Romulan story. He tries to explain why the Federation wasn't constantly at war through the movie era, what with two warlike powers on their doorstep, and continues to give us both politics and action in good doses. Starfleet takes a back seat again, but Number One and her crew get moments of bravery. There's a huge battle with loads of ships, DS9-style. And I really like what he's done with Kor and Koloth and almost wish he'd found a way to work Kang in to set up their appearance in Blood Oath. I will say that the Klingon-Romulan alliance is a bit quick to fall apart, but these guys were never meant to stay friends for long. Their egos were always going to get in the way, and it's fitting that while their leaders are respecting their agreement, men on the front line have much itchier trigger fingers. If I have a small complaint, it's that the letterer let slip a few typos, not uncommon in IDW comics. I think I'll miss getting chapters of this grand story now.
Comics Star Trek