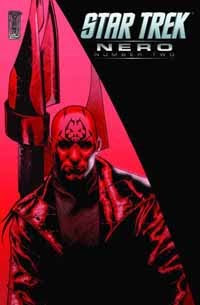 PLOT: Nero and his crew spend more than twenty years on Rura Penthe, bringing their mining skills to bear and escaping through drug use. Nero takes an oath of silence, but learns to communicate telepathically with his second-in-command. He meets an incarcerated stellar cartographer who reveals that the black hole near the Neutral Zone is due to open up again, and that Spock should come out of it. Up in orbit, the Narada refuses to let itself be dismantled by the Klingons, regenerating again and again through the years. Now it awakens and attacks the penal colony below. Nero chooses this moment to lead his people to escape, but the ship has a mind of its own and is taking them somewhere...

PANEL OF THE DAY - That's excactly what it feels like. 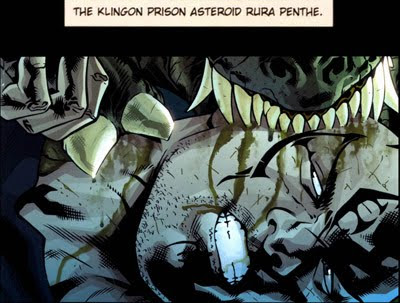 REVIEW: The years fly by, meaning that not all that much needs to be fleshed out of Nero's 25-year stay in the past. Jones and Johnson remind us once again of the family he left behind and uses his inner voice to keep us close to the character. He's not quite as engaging as he was in Countdown, but still a lot more than in Star Trek. We know he has to escape at some point, but there's still a mystery surrounding the Narada and its Borg nanotech. Nice art too. Only one thing actually bugs me about the issue, and it's how stupid the Klingons have to be in order to put Nero into the position he's in when we rejoin his story in the film. They keep his ship in orbit of the prison, dangle his fancy weapon in front of his eyes, etc. It's a bit fortuitous, but perhaps the only way to make sense of the movie's plot hole (at least, without going to more issues).
Comics Star Trek