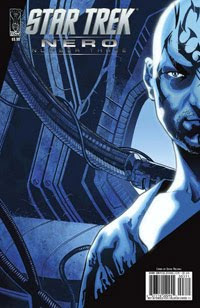 PLOT: Though Nero is mentally linked to the Narada, he cannot prevent it from flying to the edge of the Delta Quadrant where it meets up with V'ger. Nero senses that in another place and another time, Spock was/will be/would have been here (thanks to his mindmeld with the elder Spock). He is beamed to the V'ger's center while the ship makes its way there normally. When the Narada arrives, apparently having been drawn by a similar type of sentience, Nero claims to know where to find Spock...

CONTINUITY: See previous issues (Nero, Ayel, Narada, Spock). Spock and V'ger melded in The Motion Picture. The connection between V'ger and the Borg - explaining a third connection to the Narada and the use of the Delta Quadrant here - isn't canonical, but was made implicit in various sources, such as the novel The Return and the video game Legacy. 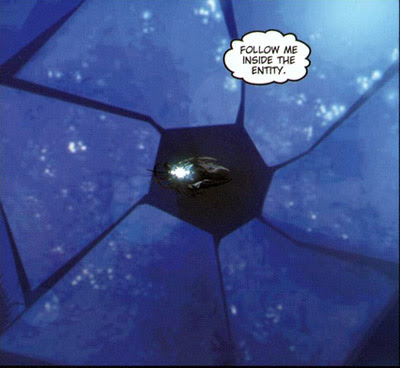 REVIEW: There is something sly about having the big bads of both The Motion Picture and Star Trek meet up, but it's like the weaknesses of both drag the issue down. Nothing much happens. We have a lots of pretty shots of a ship entering V'ger and the by now repetitive flashbacks to Nero's family, so nothing much happens. Nero discovers an important clue to Spock's arrival, but we're not told what it is. I would gladly have cut this down to a third of its length just to get a little more Papillon action on Rura Penthe, perhaps heroics in which Nero actually has to struggle to get the Nerada back from a Klingon R&D facility. It looks great, but we're definitely wasting time here.
Comics Star Trek