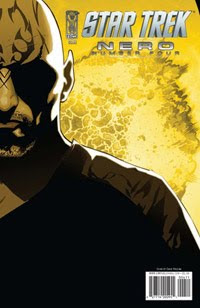 PLOT: Nero captures Spock as he comes out of the singularity and takes possession of the red matter, intent on using it to destroy Vulcan. 47 Klingon ships show up, led by Koth, to take Nero back to Rura Penthe, but the Nerada makes quick work of the fleet. Nero then strands Spock on Delta Vega.

PANEL OF THE DAY - There are a lot of panels like this one. 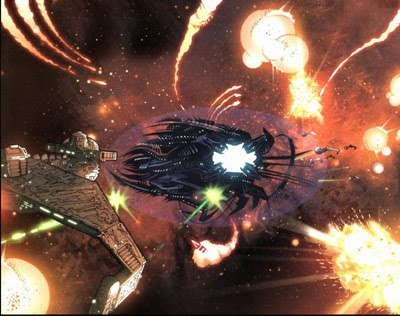 REVIEW: There's a lot of great art surrounding the Klingon attack on the Nerada and subsequent extermination of the more numerous side. And for all that action, Nero #4 is a big, boring disappointment. Without preamble, Nero captures Spock. It almost doesn't matter than V'ger told Nero where to look because it doesn't figure into the story. And we know Spock is meant to be left on Delta Vega, so that's no surprise. The big bold panels of the one-sided space battle are pretty, but they just amount to padding. They certainly aren't a complication for Nero and his crew. I'm not convinced this mini should have gone to four issues, not with that exact plot anyway.
Comics Star Trek

snell said…
I've got to ask...if the Nerada is so freakin' tough (47? Really?), why couldn't it prevent the Kelvin from ramming it, why couldn't it destroy the Enterprise, why could it capture Spock's ship effortlessly here but couldn't touch it in the movie's climax....?????
September 24, 2010 at 8:04 AM