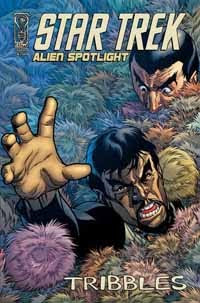 STARDATE: 1422.3 (between Where No Man Has Gone Before and The Corbomite Maneuver)

PLOT: A freighter carrying grain is invaded by Klingons and crashes on a planet overrun by tribbles. Its small human crew tries to fight its way in, but the tribbles are more effective at disrupting the Klingon line than they are. The Klingons take off, but decide to have some fun by throwing grenades at the humans through the cargo bay doors. The tribbles decide to help the "warmhands" against the "rufflefurs" by eating the grain stores aboard ship and breeding like mad inside some key piece of machinery. The ship drops back down and the Klingons flee the scene, tribbles behind them. The human crew repairs its ship and reports none of this, explaining that they lost the shipment to Klingon raiders, pure and simple.

CONTINUITY: The Tribbles first appeared in The Trouble with Tribbles.

DIVERGENCES: None, though some will arch their eyebrows at the bumpy forehead Klingons in this era. Especially with swarthy Klingons on the cover.

PANEL OF THE DAY - Just give the word.

REVIEW: Alien Spotlight returns for another go, but... tribbles? And no "name" characters to support them? Well, guess what, it works! Stuart Moore writes a really fun story with stock, but nonetheless well drawn characters, and he doesn't shy away from the goofiness of his star aliens. The tribbles have a charming, limited sentience and do what they do best - breed! - on cue! Mike Hawthorne's style is perfect for the story, at once cartoony and expressive. You will believe a tribble can move and even attack! Just a fun, fun way to start the new mini-series.
Comics Star Trek