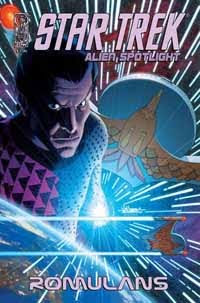 PLOT: Two days before a Senate election, the Romulan Praetor offers a political rival - the populist war hero Acastus - the gift of the very last Dreadnought-class ship and a mission to go with it. Acastus is tasked with eliminating a former friend of his branded a traitor for his unificationist views. He does so, but is immediately attacked by a new cloaked warbird that destroys his ship. The Praetor gloats that he has eliminated a rival while also associating himself with a great hero.

DIVERGENCES: The bridge of the warbird is vastly different from that of Balance of Terror.

PANEL OF THE DAY - Last of its kind 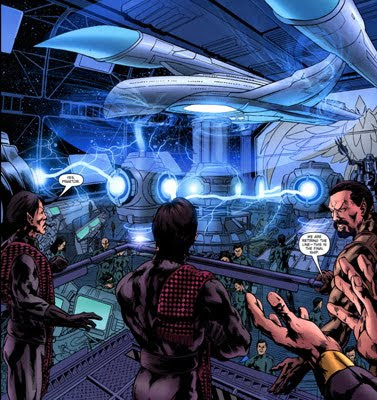 REVIEW: Ian Edgington has always been very good at playing with Star Trek continuity. I'm not sure he succeeds as well as I'd like here. I'm not entirely sure where this fits in Romulan history, as the Praetor is a heck of a lot like Byrne's "Caligula" type, and one could think the new warbirds came into play just before Balance of Terror. Except that there are Romulan ships using cloaks in Enterprise as well, which would place this long before the Original Series. But that's all nerd stuff anyway. As a stand-alone story, the Spotlight works. We see both sides of the Romulan coin - the warrior's honor and the politician's deception - with cool battle sequences and an important historical moment (the first cloak), regardless of when it happened. Remind me never to make a name for myself on Romulus, ok?
Comics Star Trek