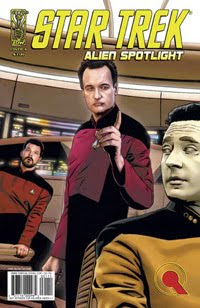 STARDATE: 51062.7 (a month after the Enterprise-E's repairs following First Contact)

PLOT: Q has decided that the reason he doesn't understand humanity is that he's never lived as a human except when everyone knew he was Q and treated him differently. He takes Picard's place just as important negotiations are supposed to take place between two alien species on the cusp of war. Picard rides shotgun as a disembodied spirit and pokes fun at Q's blunders. Eventually, as the aliens get enraged, Q gives up and lets Picard take command of his body again. He comes up with an elegant solution and Q later wonders at how well he did.

CONTINUITY: Q and Picard have not seen each other since All Good Things...

PANEL OF THE DAY - Q-antum Leap 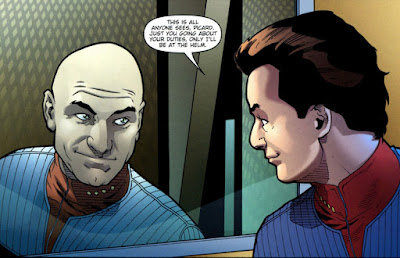 REVIEW: In the running for dullest Q story on record, this story might have worked better as a television episode, where the performances and the editing would have carried the day. As a comic book story, while it has some fun-looking aliens, it's a big talk fest and far less fun than it should have been. Q comes across as simple-minded in his approach to "a day in the life of Picard", and doesn't get to learn very much about humanity when the dilemma is non-human. Picard's solution comes from a knowing things Q doesn't, so it's not playing fair with the readers. There was no way for Q to actually win, especially not as written. A big disappointment from the usually solid Tiptons.
Comics Star Trek