Lots of new arrivals this week. The latest issue of favorite fanzine, Enlightenment, landed in my mailbox. It covers the second half of Doctor Who Series 5 and is full of nice insights. Fitting that this week I also got The King's Demons and Planet of Fire, two Doctor Who DVDs starring the fifth Doctor, neither of which I've seen before (PBS and YTV got a bit sporadic towards the end of 5's era for me). I also got into a bargain bin and grabbed two tv series continuations - V: The Final Battle, and Babylon 5: The Lost Tales. But of course, the star of the week is Chuck Season 3. It's just too bad I don't have time to watch it back before the new season starts!

DVDs: Before the international success of Shaolin Soccer and Kung Fu Hustle, Stephen Chow was having comedy successes in Hong Kong with the likes of The Royal Tramp. Though the crazy martial arts and slapstick (mostly) translate, I gotta say that even the verbal interplay works for Western audiences and we found ourselves laughing out loud at the subtitles (though apparently, we're missing a lot by not getting the huge amount of Cantonese puns). There does seem to be a lot of penis jokes, but part of the plot is the Chow's character posing as a eunuch, so we just went with it. Despite the low brow elements, this is a fun romp with a crazy convoluted plot that works. We're looking forward to an as-charming sequel (also included in the DVD release). Bey Logan supplies a good expert commentary, but it's the only extra. 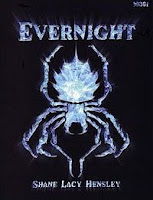 RPGs: Three sessions away from the end, now two thanks to tonight's, Savage Worlds/Evernight is really coming to a head. Big revelations about the history of the world tonight, and the players seemed appropriately shocked. Half the team hit Veteran (we've been running through the levels, I wouldn't run an open-ended campaign like that). That DC Adventures game is looming quite close now...

Hyperion to a Satyr posts this week:
II.i. Reynaldo according to the text
Geekly roundup RPGs